Tesla: Inventor of the Electrical Age 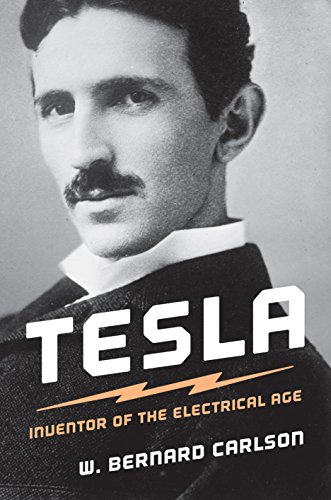 One of Amazon.com's 2013 Best Science Books
One of Booklist Online's Top 10 Science & Health Books for 2013
One of Choice's Outstanding Academic Titles for 2013
One of The Guardian's Best Popular Physical Science Books of 2014, chosen by GrrlScientist
Honorable Mention for the 2013 PROSE Award in Biography & Autobiography, Association of American Publishers
Longlisted for the 2014 Royal Society Winton Prize for Science Books
"[An] assiduous, endlessly patient biography. . . . In Carlson's eyes, Tesla's relationship with modernity in all its forms--its fixation with progress and explanation, capital and connection, but also its fragmentation of narrative and self--is more complex and revealing than even the conspiracy nuts have imagined."--Richard Barnett, London Review of Books

"Carlson sheds light on the man and plenty of his inventions. . . . [An] electric portrait."--Publishers Weekly

"Superb. . . . Carlson brings to life Tesla's extravagant self-promotion, as well as his eccentricity and innate talents, revealing him as a celebrity-inventor of the 'second industrial revolution' to rival Thomas Alva Edison."--W. Patrick McCray, Nature

"Soundly footnoted, yet eminently readable, it provides a balanced examination of the man and his work, focusing particularly on Tesla's distinctive style of invention."--Natural History

"A scholarly, critical, mostly illuminating study of the life and work of the great Serbian inventor."--Kirkus Reviews

"Carlson even has something to teach readers familiar with Seifer's dissection of Tesla's tortured psyche in Wizard (2001) and O'Neill's much earlier chronicle of Tesla's childhood and early career in Prodigal Genius (1944). Carlson provides not only a more detailed explanation of Tesla's science but also a more focused psychological account of Tesla's inventive process than do his predecessors. Carlson also surpasses his predecessors in showing how Tesla promoted his inventions by creating luminous illusions of progress, prosperity, and peace, illusions so strong that they finally unhinge their creator. An exceptional fusion of technical analysis of revolutionary devices and imaginative sympathy for a lacerated ego."--Bryce Christensen, Booklist starred review
"This is a fascinating glimpse into the life of a monumental inventor whose impact on our contemporary world is all too unfamiliar to the general public. Carlson relates the science behind Tesla's inventions with a judicial balance that will engage both the novice and the academic alike. Highly recommended to serious biography buffs and to readers of scientific subjects."--Brian Odom, Library Journal

Nikola Tesla was a major contributor to the electrical revolution that transformed daily life at the turn of the twentieth century. His inventions, patents, and theoretical work formed the basis of modern AC electricity, and contributed to the development of radio and television. Like his competitor Thomas Edison, Tesla was one of America's first celebrity scientists, enjoying the company of New York high society and dazzling the likes of Mark Twain with his electrical demonstrations. An astute self-promoter and gifted showman, he cultivated a public image of the eccentric genius. Even at the end of his life when he was living in poverty, Tesla still attracted reporters to his annual birthday interview, regaling them with claims that he had invented a particle-beam weapon capable of bringing down enemy aircraft.

Plenty of biographies glamorize Tesla and his eccentricities, but until now none has carefully examined what, how, and why he invented. In this groundbreaking book, W. Bernard Carlson demystifies the legendary inventor, placing him within the cultural and technological context of his time, and focusing on his inventions themselves as well as the creation and maintenance of his celebrity. Drawing on original documents from Tesla's private and public life, Carlson shows how he was an "idealist" inventor who sought the perfect experimental realization of a great idea or principle, and who skillfully sold his inventions to the public through mythmaking and illusion.

This major biography sheds new light on Tesla's visionary approach to invention and the business strategies behind his most important technological breakthroughs.

1. Tesla: Inventor of the Electrical Age

2. Tesla: Inventor of the Electrical Age

3. Tesla: Inventor of the Electrical Age

4. Tesla: Inventor of the Electrical Age

5. Tesla: Inventor of the Electrical Age

6. Tesla: Inventor of the Electrical Age

7. Tesla: Inventor of the Electrical Age