Twisted L-Functions and Monodromy. (AM-150) (Annals of Mathematics Studies) 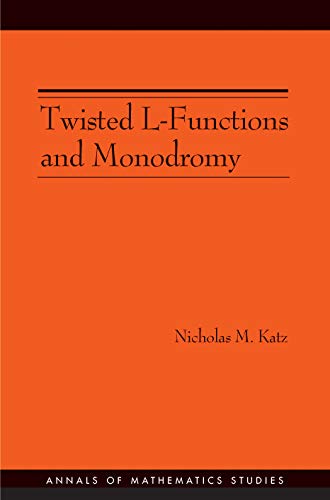 For hundreds of years, the study of elliptic curves has played a central role in mathematics. The past century in particular has seen huge progress in this study, from Mordell's theorem in 1922 to the work of Wiles and Taylor-Wiles in 1994. Nonetheless, there remain many fundamental questions where we do not even know what sort of answers to expect. This book explores two of them: What is the average rank of elliptic curves, and how does the rank vary in various kinds of families of elliptic curves?

The leisurely, lucid introduction gives the reader a clear picture of what is known and what is unknown at present, and situates the problems solved in this book within the broader context of the overall study of elliptic curves. The book's technical core makes use of, and explains, various advanced topics ranging from recent results in finite group theory to the machinery of l-adic cohomology and monodromy. Twisted L-Functions and Monodromy is essential reading for anyone interested in number theory and algebraic geometry.

Nicholas M. Katz is Professor of Mathematics at Princeton University. He is the author of four other books in this series: Arithmetic Moduli of Elliptic Curves (with Barry Mazur); Gauss Sums, Kloosterman Sums, and Monodromy Groups; Exponential Sums and Differential Equations; and Rigid Local Systems.