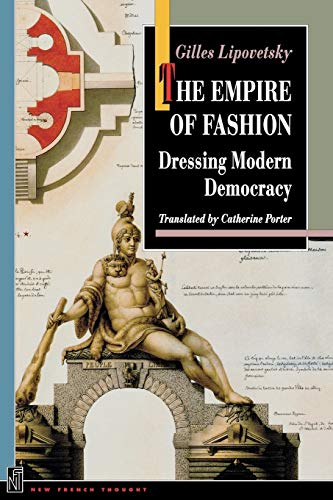 Praise for the French edition: "It is no easy thing to find an intellectual who succumbs to the futile charm of fashion, who is turned on by the seduction of the ephemeral and mocks the 'beautiful souls' who crusade against rock music and channel surfing. Now, we have finally met that rare bird, that apostle of the postmodern: his name is Gilles Lipovetsky."--Le Monde "This book makes sense of what might otherwise appear derisory, a book that permits us to understand what blinds us by being right before our eyes."--Esprit "[Lipovetsky's] is an undifferentiated celebration of modern narcissistic freedom: a defense of bourgeois individualism without the constraints of bourgeois morality... [Lipovetsky is] engaged in the contemporary predicament. He sees the sophistication of modern advertising: he is alive to the social possibilities of our cultural transformation... And because he embraces, rather than merely dismisses, the new age, he understands it better."--Andrew Sullivan, The New Republic "Like all books that really count, Lipovetsky's possesses the virtue of breaking the commonplace consensus... [It is a] savory analysis of the infinite detail of the meanderings in the ephemeral. His thesis is fundamentally the following: if it is clear that fashion is a mix of conformity and of individual choice, its very emergence as a historical phenomenon manifests a global and typically Western logic, that of the break with tradition."--Luc Ferry, L'Express "This books will entice scholars but is also readily accessible ... and of interest to many general readers. This makes it a rare find among its kind."--Library Journal "Defining it to include not just clothing styles but also sex roles, political rhetoric, and other forms of expression, [Lipovetsky] argues that fashion promotes innovation over tradition and individuality over conformity... Lipovetsky aims not to convince, but merely to sway... his ideas are seductive in their audacity."--Etelka Lehoczky, The Boston Phoenix Literary Section "By its nature, fashion is unstable, ephemeral and superficial: exactly the features of social relations in today's democratic polities. No need for concern, according to [Gilles] Lipovetsky. The less we feel or care about each other, the better we will get along... An impersonal social structure is an ideal setting for mutual tolerance and the reduction of conflict... A brilliantly original argument becomes dazzling when the principles of fashion--obsolescence, seduction, diversification--are extended to analyse a consumer society in which novelty is paramount, and identity shattered into fragments. Far from homogenising us, as many early writers suspected, mass culture has accelerated the process of individualization. And that can heighten the capacity for social integration."--New Statesman & Society "Lipovetsky has written an eclectic book that moves easily from discussing Tocqueville or Kant to analyzing the impact of the length of ladies' hemlines on our political culture."--Adam Wolfson, The Public Interest "Surveying 2,000 years of global history, [Gilles] Lipovetsky claims that fashion provides the means for stability in modern Western capitalist democracies... Attempts to understand the relationships between consumer-driven desires and natural desires in modern, mass-culture democracies lead Lipovetsky to provocative conclusions... [this work] offers refreshing insights into today's social structure."--Choice "Lipovetsky argues that with the haute couture in decline, with multiculturalism and dissolving social classes, we are increasingly prompted to acquire things for our private uses, without reference to other people. We buy a VCR not to impress, since everybody has one, but to watch movies."--Diane Johnson, New York Review of Books

In a book full of playful irony and striking insights, the controversial social philosopher Gilles Lipovetsky draws on the history of fashion to demonstrate that the modern cult of appearance and superficiality actually serves the common good. Focusing on clothing, bodily deportment, sex roles, sexual practices, and political rhetoric as forms of "fashion," Lipovetsky bounds across two thousand years of history, showing how the evolution of fashion from an upper-class privilege into a vehicle of popular expression closely follows the rise of democratic values. Whereas Tocqueville feared that mass culture would create passive citizens incapable of political reasoning, Lipovetsky argues that today's mass-produced fashion offers many choices, which in turn enable consumers to become complex individuals within a consolidated, democratically educated society. Superficiality fosters tolerance among different groups within a society, claims Lipovetsky. To analyze fashion's role in smoothing over social conflict, he abandons class analysis in favor of an inquiry into the symbolism of everyday life and the creation of ephemeral desire. Lipovetsky examines the malaise experienced by people who, because they can fulfill so many desires, lose their sense of identity. His conclusions raise disturbing questions about personal joy and anguish in modern democracy.

1. The Empire of Fashion

5. The Empire of Fashion: Dressing Modern Democracy (Paperback or Softback)

Buchbeschreibung 2002. Zustand: NEW. 9780691102627 This listing is a new book, a title currently in-print which we order directly and immediately from the publisher. For all enquiries, please contact Herb Tandree Philosophy Books directly - customer service is our primary goal. Bestandsnummer des Verkšufers HTANDREE01145156