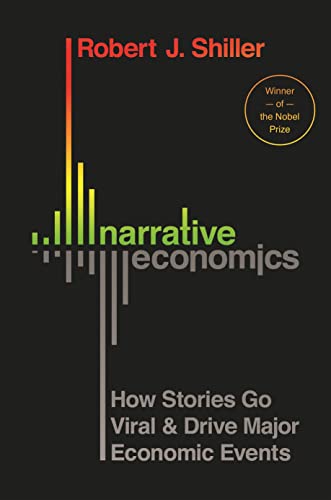 Críticas:
"[Shiller aims] to identify the enduring narratives that influence the way we think about the economy, and may influence our patterns of spending and saving, and therefore become self-fulfilling prophecies . . . the results are fascinating, and sometimes startling."---Howard Davies, Prospect "One of the Financial Times' Best Books of 2019: Economics" "An engaging scholarly study of the stories we tell about economic events-stories that go viral, for better or worse . . . . Of immense value to economists and policymakers working on the behavioral side of the field." * Kirkus Reviews * "A magisterial account . . . . In some ways . . . a bigger challenge to the foundations of economics than behavioral economics."---Steve Denning, Forbes "Much of the book . . . . is an enjoyable and well-informed description of such narratives. I especially liked his discussion of bimetallism, wherein he shows that Brexit is not the first debate about an abstruse issue which triggered a culture war."---Chris Dillow, Stumbling & Mumbling "Shiller's book is a spectacular effort at unifying distinct fields and encouraging the profession to be ever more capacious in its approach to phenomena and methodology."---Mihir Desai, Times Higher Education "Shiller argues forcefully."---Chris Johns, Irish Times "Highly readable, compelling."---Steve Levine, Medium "Shiller has none of the salesman-like bluster of the stock pickers clamouring for attention on business TV news . . . . As it is, he has only 40-odd years of being freakishly right about things. It will have to do. "---David Morris, Financial News "Any given scenario can allow for multiple narratives, both actual and potential. The question is why some prove more compelling than others. Shiller offers a range of answers, starting with the most obvious: a narrative is compelling when it is engaging and well expressed. Because his book is very well written, Shiller himself has satisfied this criterion."---Barry Eichengreen, Project Syndicate "Provocative . . . . Especially timely in the current social media-obsessed era, because narratives-both real and false-can spread globally with just a few swipes, affecting not just economic activity, but ultimately the balance of geopolitical power."---Matt Schifrin, Forbes "Shiller's thorough discussion and many examples are certainly convincing as to the importance of narratives in individual economic decision-making and aggregate economic phenomena."---Sonia Jaffe, Science "The book is . . . good fun to read. It is full of amusing and apposite quotations, and interesting detail."---Charles Goodhart, Central Banking Journal "What's surprising, perhaps, is that the gearheads in academic economics departments may finally be getting wind of all this. If they are, much of the credit must go to Robert J. Shiller, the Yale economist who won the Nobel Prize in his field in 2013. Shiller's iconoclastic new book, Narrative Economics, ranges across disciplines to explore the role of narratives in explaining (as the subtitle has it) 'how stories go viral and drive major economic events'."---Daniel Akst, Strategy+Business "Excellent . . . [this] snappy little book opens the path to a more comprehensive dialogue."---Gillian Tett, Financial Times "Many economists argue that the US housing market and economy are still on solid foundations, but ignore Shiller's warnings at your peril. He rarely gets it wrong. "---Tom Rees, The Telegraph "The idea that human behaviour can exert its own influence in the market is something that most traders would buy into. . . . But in Narrative Economics, Shiller goes much broader and deeper, looking at how the stories we tell ourselves about the world drive our behaviour. . . . Economists, he argues, need to study this if they are to have any hope of doing a better job than they have in the past of predicting major events . . . and how people react to them. "---Rana Faroohar, Financial Times
Reseńa del editor:
From Nobel Prize-winning economist and New York Times bestselling author Robert Shiller, a new way to think about how popular stories help drive economic events In a world in which internet troll farms attempt to influence foreign elections, can we afford to ignore the power of viral stories to affect economies? In this groundbreaking book, Nobel Prize-winning economist and New York Times bestselling author Robert Shiller offers a new way to think about the economy and economic change. Using a rich array of historical examples and data, Shiller argues that studying popular stories that affect individual and collective economic behavior-what he calls "narrative economics"-has the potential to vastly improve our ability to predict, prepare for, and lessen the damage of financial crises, recessions, depressions, and other major economic events. Spread through the public in the form of popular stories, ideas can go viral and move markets-whether it's the belief that tech stocks can only go up, that housing prices never fall, or that some firms are too big to fail. Whether true or false, stories like these-transmitted by word of mouth, by the news media, and increasingly by social media-drive the economy by driving our decisions about how and where to invest, how much to spend and save, and more. But despite the obvious importance of such stories, most economists have paid little attention to them. Narrative Economics sets out to change that by laying the foundation for a way of understanding how stories help propel economic events that have had led to war, mass unemployment, and increased inequality. The stories people tell-about economic confidence or panic, housing booms, the American dream, or Bitcoin-affect economic outcomes. Narrative Economics explains how we can begin to take these stories seriously. It may be Robert Shiller's most important book to date.