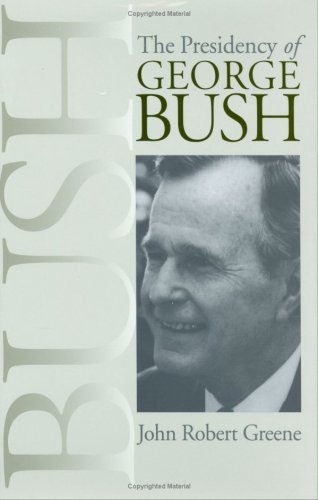 "A concise and readable account of the Bush presidency based on a mastery of the secondary literature, judicious interviews with the participants, and citations from the Bush presidential library. Greene offers a balanced and quite convincing picture of Bush's policies at home and abroad. His portrait of Bush as a person and treatment of Bush's foreign policy are particularly well done."--Robert Divine, author of Eisenhower and the Cold War and Eisenhower and Sputnik

How could a president have won a war and lost an electon? For George Bush, being Commander in Chief during Desert Storm was not enough. Domestic issues, personality factors and the vagaries of the 1992 campaign confined his presidency to a single term. John Robert Greene helps us understand why. This history of George Bush's administration paints a portrait of a "positive moderate" whose acomplishments are often underrated. The book makes use of a range of literature on the forty-first president - including the Bush Papers at the George Bush Presidential Library at Texas A&M University - and draws on key interviews with members of his administration, and with George Bush himself. Greene sets Bush's presidency in the context of the Reagan years and reviews not only his foreign policy successes, notably the war with Iraq and an improved relationship with Russia, but also key domestic issues such as the economic recession, the much maligned "Read My Lips" tax hike, Clarence Thomas's controversial Supreme Court appointment, and the enactment of bills that protected the environment and improved the lives of disabled Americans. The author offers an analysis of Bush's bid for re-election, describing a campaign that saw conservatives abandoning Bush in droves while early signs of an economic upturn did little to defuse the Democrats' advantage. The book depicts the president as a man of patience and prudence, who placed great value on loyalty, and was better at managing crises than he was the day-to-day demands of the presidency. It portrays the sense of humour and love of the outdoors in a man often branded an elitist or a wimp, who was never able to ultimately manipulate his public image to his advantage. "The Presidency of George Bush" takes into account the many facets of the Bush administration, from the spirited optimism of a thousand points of light to the unsettling vagueness of "the vision thing", and shows us a man whose careful stewardship set the tone for post-Cold War foreign policy. As Greene notes, while Bush had his critics, it was on his watch that the Cold War ended and America re-asserted its military might.