The History of Gaelic Football 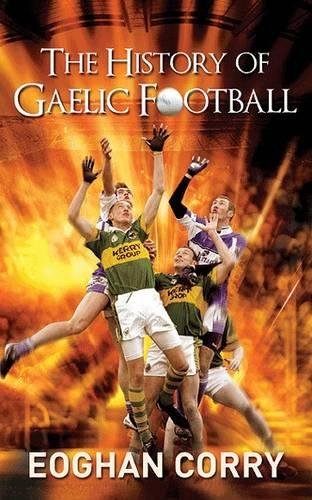 Gaelic footballers and their followers receive no payment, have no transfer system, and remain loyal to their home county as players or supporters. This is more than a sport - it is a subculture of its own, with songs, stories and ceremonies that are unique in the sporting world. In this fascinating book, Eoghan Corry describes: * The emergence of teams and players whose new tactics brought success, as well as the rivalries, near misses and failures which entered the folklore of the game * How the early rule makers observed existing pastimes, prevalent in both urban and rural areas, and turned them into an organised sport * How regional and international influences helped shape Gaelic football and how it has been changed by the games, players, innovators and officials in every decade since the GAA was founded in 1884. The History of Gaelic Football also outlines how the game became entangled in the politics of Ireland's independence movement, the internal debates and the organisational difficulties that have coloured the history of the sport. Tracing the course of the game as it weaves and bobs through political controversy, civil war, and the fast-changing Irish society since the 1950s, it shows how the development of techniques and tactics reflected wider trends in Irish society. It recounts the often hilarious incidents, the invading crowds, the crazy goals, the blind referees, the rough, the tough and the bizarre that all characterise Gaelic football everywhere it has been played, from Oxmantown Green in the 1700s to Melbourne Cricket ground in the 21st century. But above all it celebrates the players who brought entertainment, excitement and excellence, and who enriched the lives of ordinary people through the length and breadth of the country.

The late Donal Nevin was a distinguished labour historian and former General Secretary of the Irish Congress of Trade Unions. SIPTU General President Jack O'Connor expressed his deep regret at the death of Nevin, describing him as a man `of great intellect and absolute integrity'. Nevin was General Secretary to the Congress from 1982 to 1989 and author of James Larkin: Lion of the Fold.

1. The History of Gaelic Football

Buchbeschreibung Paperback. Zustand: Good. The book has been read but remains in clean condition. All pages are intact and the cover is intact. Some minor wear to the spine. Bestandsnummer des Verkäufers GOR004218922

2. The History of Gaelic Football

3. The History of Gaelic Football

Buchbeschreibung Gill & MacMillan 2010-05-07, 2010. Paperback. Zustand: Very Good. Item is in very good condition. If supplemental codes/CDs for textbooks are required please contact us prior to purchasing as they may be missing. Bestandsnummer des Verkäufers DS-0717148181-2

4. The History of Gaelic Football

5. The History of Gaelic Football

Buchbeschreibung Gill & Macmillan Ltd, 2010. Paperback. Zustand: Very Good. The History of Gaelic Football This book is in very good condition and will be shipped within 24 hours of ordering. The cover may have some limited signs of wear but the pages are clean, intact and the spine remains undamaged. This book has clearly been well maintained and looked after thus far. Money back guarantee if you are not satisfied. See all our books here, order more than 1 book and get discounted shipping. . Bestandsnummer des Verkäufers 7719-9780717148189