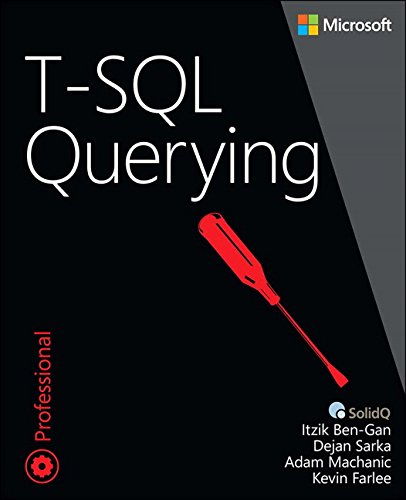 Itzik Ben-Gan is a mentor for and co-founder of SolidQ. A SQL Server Microsoft MVP (Most Valuable Professional) since 1999, Itzik has delivered numerous training events around the world focused on T-SQL querying, query tuning, and programming. Itzik has authored several T-SQL books as well as articles for SQL Server Pro, SolidQ Journal, and MSDN. Itzik's speaking activities include TechEd, SQLPASS, SQL Server Connections, SolidQ events, and various user groups around the world. Itzik is the author of SolidQ's Advanced T-SQL Querying, Programming and Tuning, and T-SQL Fundamentals courses, along with being a primary resource within the company for its T-SQL-related activities. Dejan Sarka, MCT and SQL Server MVP, is an independent consultant, trainer, and developer focusing on database and business intelligence applications. His specialties are advanced topics like data modeling, data mining, and data quality. On these tough topics, he works and researches together with SolidQ and the Data Quality Institute. He is the founder of the Slovenian SQL Server and .NET Users Group. Dejan Sarka is the main author or coauthor of 11 books about databases and SQL Server, with more to come. He also has developed and is continuing to develop many courses and seminars for SolidQ and Microsoft. He has been a regular speaker at many conferences worldwide for more than 15 years, including Microsoft TechEd, PASS Summit, and others. Adam Machanic is a Boston-based SQL Server developer, writer, and speaker. He focuses on large-scale data warehouse performance and development and is author of the award-winning SQL Server monitoring stored procedure, sp_WhoIsActive. Adam has contributed to several books on SQL Server, including T-SQL Querying (Microsoft Press, 2015) and SQL Server 2008 Internals (Microsoft Press, 2009). He regularly speaks at international conferences and training events on a variety of SQL Server topics. Kevin Farlee has over 25 years in the industry, in both database and storage-management software. In his current role as a Storage Engine Program Manager on the Microsoft SQL Server team, he brings these threads together. His current projects include the SQL Server Project "Hekaton" In-Memory OLTP feature.

Buchbeschreibung Paperback. Zustand: New. Paperback. This book gives students a detailed look at the internal architecture of T-SQL and a comprehensive programming reference. Readers will tackle the toughest set-based querying and query tuni.Shipping may be from multiple locations in the US or from the UK, depending on stock availability. 864 pages. 1.414. Bestandsnummer des Verkäufers 9780735685048