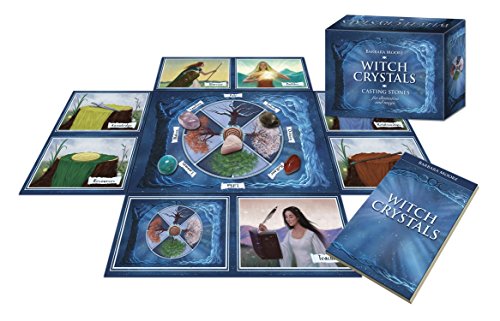 Divine the answers to your most important questions and tune in to the natural harmony of the world around you. With five ritual stones, eight divination cards, a colorful Wheel of the Year board, and a 160-page book, The Witch’s Crystals Kit provides everything you need to start an empowering journey of divination. Tap into the energy of the crystals, explore the magic of your inner self, and channel the ancient powers of the earth.

The companion booklets for most Lo Scarabeo decks are in five languages: English, Spanish, French, Italian, and German.

In the early 1990s, at a party, someone put a tarot deck in Barbara's hands; she's held on tightly ever since. Tarot provides just enough structure so that we don't get lost as we explore the mysteries, plumb our dark corners, and locate our North Stars.

Barbara has been reading and writing for as long as she can remember. She's published a number of books on tarot, including Tarot for Beginners, Tarot Spreads, The Steampunk Tarot, The Gilded Tarot, The Mystic Dreamer Tarot, and Tarot of the Hidden Realm. Writing is solitary work and is relieved by teaching tarot at conferences around the world. Barbara also loves working directly with clients, helping them uncover guidance and insight in the cards.

Connect with Barbara online at www.tarotshaman.com.