The Unstrung Harp: Or, Mr Earbrass Writes a Novel 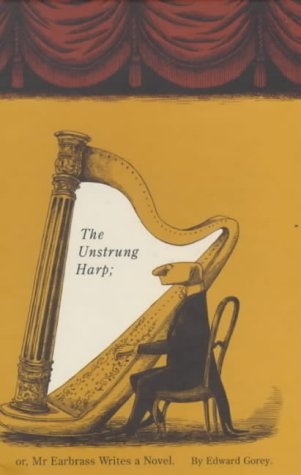 Perhaps one of his most autobiographical works, "The Unstrung Harp" is a look at the literary life and its 'attendant woes: isolation, writer's block, professional jealousy, and plain boredom.' But as with all of Edward Gorey's books, "TUH" is also about life in general, with its anguish, turnips, conjunctions, illness, defeat, string, parties, no parties, desuetude, fever, tides, labels, mourning, elsewards. Finally, "TUH" is about Edward Gorey the writer, about Edward Gorey writing "The Unstrung Harp". Originally published in 1953, it's a small masterpiece.

Edward Gorey is one of the most renowned cartoonists of our time. His distinctive and unsettling work has appeared on many New Yorker covers, and in almost a hundred successful books of his own. He has also illustrated books by John Updike, T.S. Eliot, Edward Lear and Samuel Beckett. 'The dark, appallingly funny works of Edward Gorey are finally being published in Britain. Not before time. A writer and artist of genius.' Independent on Sunday 'Malevolent and brilliant.' Big Issue