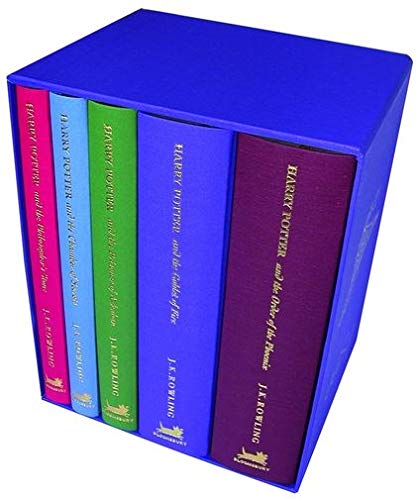 "The world of Hogwarts is complete in every riotous, headlong detail. The richness and scale of Rowling's invention is exhilerating - but the real proof of quality lies in J.K. Rowling's power to draw the reader into Harry's world and make it seem believable" - "Guardian". "The Harry Potter books are that rare thing, a series of stories adored by children and adults alike" - "Daily Telegraph". Enjoy the indulgence of all the Harry Potter stories right at your fingertips in this beautiful box set - ideal for dipping into all your favourite chapters or for diving in at the start to immerse yourself in the magical world of Hogwarts.

Buchbeschreibung Hardcover. Zustand: Near fine. First edition. Near fine condition/VGC. Bloomsbury in 2003.Harry Potter boxset with five special editions, including: The Philosopher's Stone,1999 First edition-12th printing-The Chamber Of Secrets,1999 First Edition-10th printing-The Prisoner Of Azkaban,1999 First Edition-10th printing (Joanne Rowling is displayed on copyright page) -The Goblet Of Fire,2000 First Edition-7th printing-The Order Of The Phoenix,2003 First edition-first printing. The Prisoner Of Azkaban has several printing errors that were changed in later editions.Printed in UK by Clays.Pictorial hardbacks (gilt lettering and illustration on the front cover,gilt lettering to the spine, small nicks and dents on the edges of the covers and spines, light shelf wear on the edges of the spines for book 1 and 5)) in near fine condition, with an illustrated blue slipcase (gold print of all five titles on the back of the case and gold print of the Author's signature and Hogwarts Express on each side of the slipcase, small nicks and dents on the edges of the slipcase, small mark and colour marks inside the sides of the slipcase) in VGC.Nice and clean pages as new with a couple of small ink marks on the outer edges, light shelf wear on the slipcase. All five deluxe books are true collectors editions with their high quality hardback covers bound in fine cloth with JK Rowling's signature embossed in gold lettering and fine gilt edged pages. A collectable boxset. Please note: This is very heavy boxset (approx 4.5 Kg). Bestandsnummer des Verkäufers 9404