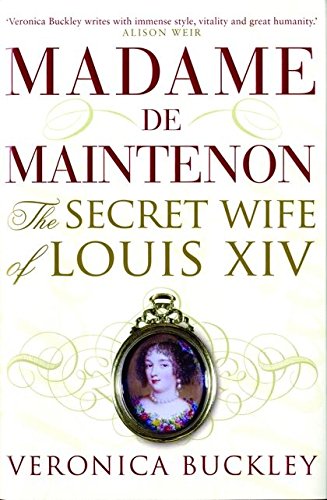 'Ms Buckley has written an admirably balanced life with a wealth of biographical detail and great sympathy for her subject' The Economist Praise for Christina, Queen of Sweden: 'A stunning debut. Veronica Buckley writes with immense style, vitality and great humanity. As compelling as the most riveting of novels' Alison Weir 'An impressive first biography Fascinating' Antonia Fraser, The Times

Francoise d'Aubigne was born in a bleak provincial fortress in 1635, her father a condemned murderer and traitor. Yet during her lifetime she managed to make her way from desperate poverty, via the bountiful and treacherous Caribbean islands, to a brilliant salon life in Paris and the centre of power at Versailles. Married at fifteen to forty-two-year-old Paul Scarron, tragically disfigured and scandalously popular poet of the burlesque, Francoise encountered in her husband's famous salon all the brilliant, beautiful, comic and tragic characters of the seventeenth-century's glitterati.After his death she led the life of a merry widow among her friends in the Marais quarter of Paris, before being chosen by the King's mistress, Athenais de Montespan, as governess for her growing brood of royal batards. Leaving the pleasures of the Marais behind her, Francoise began a new life at court, first at the genteel palace of Saint-Germain, then at the King's fabulous new folly of Versailles. This is the extraordinary story of Francoise's progress from governess to royal mistress and thence, in secret, to the compromised position of Louis' uncrowned Queen. Through the rags-to-riches tale of the marquise de Maintenon Veronica Buckley reveals every layer of the vibrant and shocking world that was France in the age of Louis XIV.

Buchbeschreibung Bloomsbury Publishing PLC. Hardcover. Zustand: New. She progressed from 15-year-old bride of a scandalous, disfigured poet to being chosen, when a merry widow, as a governess for the growing brood of royal bastards. At court she caught the king's eye and progressed from governess to mistress and then, in secret, to the difficult, compromised position of Louis's uncrowned Queen. Bestandsnummer des Verkäufers 9780747580980