Harry Potter and the half-blood prince: 6/7 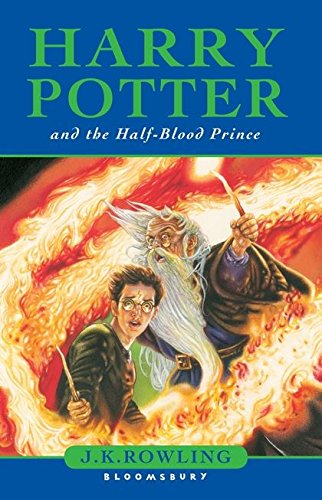 'Fast, dark, exciting and tightly plotted' Daily Mail 'Taut, witty, effortlessly engaging, and very, very nasty. How we yearn for more' TLS 'Everything in the series starts to come to fruition This ingenius setting up is intriguing for aficionados who have been hungry to discover what happens next' Sunday Times 'A Gripping story with its clues trailed through the text, chills, spills and some excellent, new comic characters. there is a measure of sadness too one of the elements of Rowling's writing that I think entitles her to a seat in the pantheon' Julian Fellowes, Sunday Telegraph

"In a brief statement on Friday night, Minister for Magic Cornelius Fudge confirmed that He Who Must Not Be Named has returned to this country and is once more active. "It is with great regret that I must confirm that the wizard styling himself Lord - well, you know who I mean - is alive and among us again," said Fudge." These dramatic words appeared in the final pages of "Harry Potter and the Order of the Phoenix". In the midst of this battle of good and evil, "Harry Potter and the Half-Blood Prince" takes up the story of Harry Potter's sixth year at Hogwarts School of Witchcraft and Wizardry, with Voldemort's power and followers increasing day-by-day.

HARRY POTTER AND THE HALF - BLOO