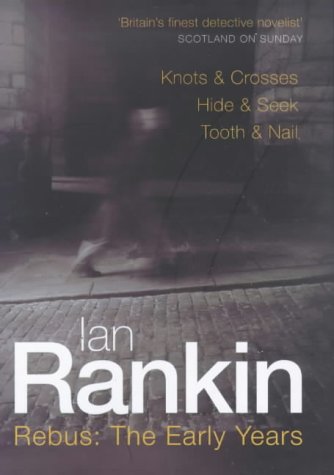 KNOTS & CROSSES: Two girls have been abducted and brutally murdered. Now a third is missing. Detective Sergeant John Rebus, his own young daughter spirited away south by his disenchanted wife, is one of the policemen hunting the killer. And then the messages begin to arrive: knotted string and matchstick crosses - taunting Rebus with pieces of a puzzle only he can solve.

HIDE & SEEK: A junkie lies dead in an Edinburgh squat. Just another addict, until Inspector Rebus begins to chip away at the indifference, treachery, deceit and sleaze that lurk behind the façade of the city familiar to tourists. And only Rebus seems to care about a death that looks more like murder every day, a death that appeals to the darkest corners of his mind.

TOOTH & NAIL: Drafted down to the Big Smoke thanks to a supposed expertise in the modus operandi of serial killers, Inspector Rebus is on the trail of a man who, due to his penchant for taking a bite from each of his victims, is known as the Wolfman. When Rebus is offered a profile of the Wolfman by an attractive lady psychologist, it seems too good an opportunity to turn down. But in finding an ally, he may have given his enemies an easy means of attack . . .

Born in the Kingdom of Fife in 1960, Ian Rankin graduated from the University of Edinburgh in 1982, and then spent three years writing novels when he was supposed to be working towards a PhD in Scottish Literature. His first Rebus novel was published in 1987, and the Rebus books are now translated into thirty-six languages and are bestsellers worldwide.Ian Rankin has been elected a Hawthornden Fellow, and is also a past winner of the Chandler-Fulbright Award. He is the recipient of four Crime Writers' Association Dagger Awards including the prestigious Diamond Dagger in 2005. In 2004, Ian won America's celebrated Edgar Award for Resurrection Men. He has also been shortlisted for the Anthony Award in the USA, won Denmark's Palle Rosenkrantz Prize, the French Grand Prix du Roman Noir and the Deutscher Krimipreis. Ian Rankin is also the recipient of honorary degrees from the universities of Abertay, St Andrews, Edinburgh, Hull and the Open University.A contributor to BBC2's Newsnight Review, he also presented his own TV series, Ian Rankin's Evil Thoughts. Rankin is a number one bestseller in the UK and has received the OBE for services to literature, opting to receive the prize in his home city of Edinburgh, where he lives with his partner and two sons. www.ianrankin.net Twitter @Beathhigh