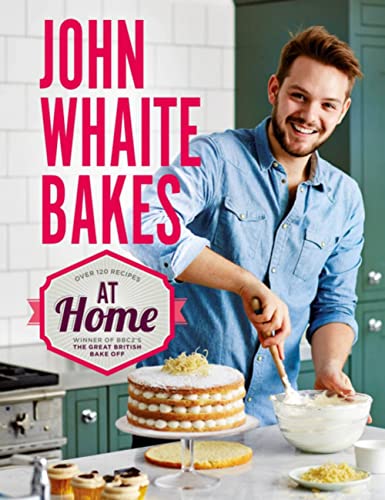 John Whaite, winner of the 2012 Great British Bake Off, bakes everywhere he goes - at food festivals, as a guest on the nation's top cookery shows, at Le Cordon Bleu school where he is perfecting his craft and as teacher at his new cookery school. Yet his favourite place to bake is still at home, creating delicious treats and feasts for his family and friends.

In John Whaite Bakes At Home, John shares with us those recipes he saves for his nearest and dearest. The lunches, brunches and afternoon teas he whips up when his parents come to visit, the indulgent sweet bakes and savoury pizzas he has waiting when his friends come to stay, and the picnics, confectionery and special occasion cakes he prepares for, and with, his nieces and nephews. So whether you want a birthday cake to impress or a comfort food feast to welcome the whole family, if you're after straightforward homemade recipes with a modern twist, this is the book for you.

John Whaite is the winner of BBC 2's The Great British Bake Off, 2012. He has been a keen baker and cook since he was a tiny tot, when he would spend many hours in the kitchen with his mum. From banking to baking, after winning the Bake Off John was able to give up his mundane day job as a city commercial banker to focus on the one thing he is truly obsessed with: food. In 2013 he fulfilled one of his lifelong dreams and attend Le Cordon Bleu in London to study the nine-month patisserie diploma.