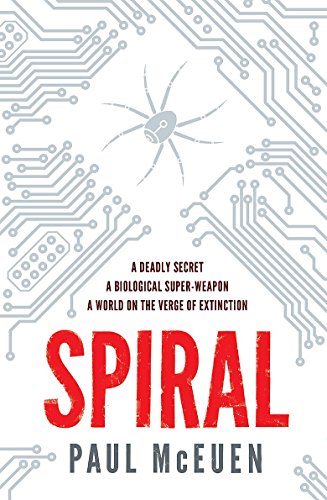 Advance praise for "Spiral" ""Spiral "by Paul McEuen carries the reader on a fascinating ride through a world of bioweaponry, nanoscience, murder, and international intrigue. This gripping story, partially based on Unit 731, the biological warfare group of the Imperial Japanese Army in World War II, is one of the best debut thrillers I've read in a long time."--Douglas Preston, author of "Impact" and "The Monster of Florence" ""Spiral" is an all-too-frighteningly-real tale. This is an exciting debut."--Steve Berry, author of T"he Emperor's Tomb"" " "A riveting story that combines international intrigue with fascinating inventions such as the MicroCrawler, a spiderlike robot with knife-sharp legs. In more ways than one, "Spiral" will get under your skin." --Mark Alpert, author of "Final Theory" "Fast-paced and suspenseful . . . McEuen, a leader in nanoscience research at Cornell, makes unsettling use of recent developments in the field. . . . After you

Pacific Ocean 1946: Liam Connor of the British Army, a global expert on germ warfare, is sent to help the US Navy foil an attempt by a Japanese submarine to unleash the world's first biological super-weapon. Code-name: Uzumaki. Translation: Spiral. The devastating decision is made to annihilate Spiral by releasing the world's fourth atomic bomb, obliterating the weapon before it can release its catastrophic payload.
New York, present day: Connor, now a world-renowned Nobel prize-winner working on the cutting edge of nano-science technology, prayed that the spectre of Spiral would never return. But now it is back and the stakes are exponentially higher. Spiral would be virtually unstoppable with current technological advances and only Connor holds the key to its cure. Those who seek Spiral will stop at nothing to obtain Connor's knowledge, even if it means his death and that of everyone he holds dear. As the race begins for Spiral, will the world survive the Doomsday scenario about to unfold?