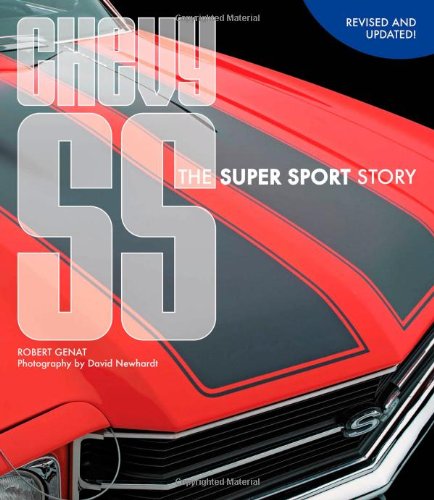 On the 1957 auto show circuit, Chevrolet unveiled a show car based on its Corvette and dubbed it the “Super Sport.” The performance car world took one look and never looked back. A combination of styling and performance upgrades, the SS package could turn something as mundane as a six-cylinder Malibu into the fire-breathing Chevelle SS396. This book traces the long line of legendary SS models, from Chevy’s Super Sport version of its popular Impala, which marked the dawn of the muscle car era, to today’s Impala SS. Featuring the work of acclaimed photo ace David Newhardt, Chevy SS: The Super Sport Story provides a close-up, detailed, full-color look at such classic muscle cars as the Chevelle, the El Camino, the Malibu, and the Monte Carlo as well as today’s hot Camaro SS. The book is a fittingly elegant celebration of the cars that redefined “high performance” and defined an era.

It all began in 1957, when Chevrolet displayed a stunning Corvette-based show car called the “Super Sport.” A few years later, Super Sport badging would begin to appear on production models to advertise the high-performance option package included therein. As the classic muscle car era unfolded, the legendary SS nameplate would come to define the era, gracing some of the fastest, most powerful American cars ever built, such as the LS6-powered Chevelle SS 454 and the L89-powered Camaro SS 396. Over the decades, the SS legend has lived on in the annals of Chevy performance cars, now gracing the grille and tail of the newest and hottest Chevrolet, the fifth-generation Camaro. With Robert Genat’s definitive text and the stunning images of acclaimed photographer David Newhardt, Chevy SS: The Super Sport Story presents these spectacular machines as they’ve never been seen before.

Buchbeschreibung Motorbooks, 2012. Zustand: Good. A+ Customer service! Satisfaction Guaranteed! Book is in Used-Good condition. Pages and cover are clean and intact. Used items may not include supplementary materials such as CDs or access codes. May show signs of minor shelf wear and contain limited notes and highlighting. Bestandsnummer des Verkäufers 0760342970-2-4

Buchbeschreibung Motorbooks, 2012. Paperback. Zustand: VERY GOOD. Pages are intact and are not marred by notes or highlighting, but may contain a neat previous owner name. The spine remains undamaged. Bestandsnummer des Verkäufers 0760342970_abe_vg

Buchbeschreibung Motorbooks, 2012. Paperback. Zustand: GOOD. Has little wear to the cover and pages. Contains some markings such as highlighting and writing. Bestandsnummer des Verkäufers 0760342970_abe_gd