Infinity and Me (Carolrhoda Picture Books) 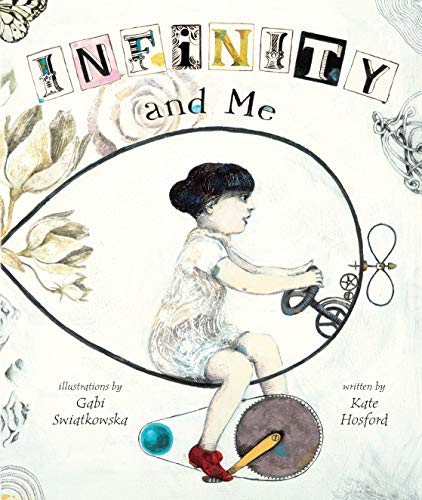 "Beautifully captures the personal side of infinity through a young girl's mind-expanding, heart-expanding journey. Infinitely charming." --Betsy Franco, author of Zero Is the Leaves on the Tree

"To many young children, infinity is just a word that may be used to max out a quantity and end an argument. But at some point, kids will try to wrap their minds around the actual concept, and this ambitious picture book will help. Looking up at the endless stars, Uma feels 'very, very small' and begins to think about infinity. She asks around--friends, Grandma, teachers--and receives a formidable potpourri of interpretations and explanations. Uma is overwhelmed by the mental exercise, and her musings and worries are perfectly childlike ('Maybe I could lick an ice-cream cone forever, but what if my tongue started to hurt?'). Grandma brings Uma back to reality with a compliment on her new red shoes that she's been waiting for all day, and Uma lands on her own practical understanding of infinity ('my love for her was as big as infinity'). Even for adults, this is an enormously complex idea--scientifically, mathematically, philosophically--but Hosford smoothly distills it to a manageable serving that will both engage and challenge kids. Swiatkowska's art, too, is remarkable at this elucidation, illustrating the text literally but with appropriately disorienting and surreal details that combine to whimsical, visually stunning effect. An author's note provides some background on the concept's history as well as quotes from real children on what infinity means to them." --The Horn Book Magazine

"Uma's struggle with the meaning of infinity offers readers a playful, gorgeous introduction to the mathematical concept.

When little Uma gazes at the vast night sky and wonders how many stars are there, she asks, 'How could I even think about something as big as infinity?' When friends, her grandmother, the school cook and the music teacher offer creative ways of describing infinity, Uma ends up feeling rather overwhelmed. She then realizes that her pondering has made her forget about the new red shoes she'd been so excited about right before her stargazing musings began. Worse yet--no one had noticed her fancy new footwear that day! But after school, Grandma tells her 'Uma, I meant to tell you this morning--those are the most beautiful shoes I have ever seen!' and in a joyous spread, Uma glories, '...my love for her was as big as infinity.' Then Uma and her grandmother go outside to look at the sky, and '[s]nuggled up to Grandma, the sky didn't seem so huge and cold anymore. Now it was more like a sparkly blanket, covering us both.' While Hosford's text deftly evokes the child's voice, Swiatkowska's expressive, lush illustrations steal the show, providing infinite opportunities for readers to examine each and every spread.

"This unusual, philosophical picture book makes this seemingly difficult concept approachable and interesting. Young Uma ponders the concept of infinity with the help of friends and family. She finds that the idea can be mind-boggling, but seems less scary when considered in loving company. The story effortlessly combines the enormity of the universe with the frankly personal, as represented by Uma's pride in her new red shoes. Characters define infinity with charming and age-appropriate examples, from a family tree that goes on forever to a never-ending ice-cream cone. A fascinating endnote lets youngsters hear the voices of real children explaining infinity and challenges readers to define it for themselves. Swiatkowska's whimsical, surreal, old-fashioned paintings are well suited to the subject matter. Her art also grace Ilene Cooper's The Golden Rule (Abrams, 2007), another thoughtful picture book, which would combine well with this one. This quiet jewel is sure to spark contemplation and conversation among readers." --School Library Journal

"Dark-haired Uma sits wide-eyed in her backyard under a black, star-studded sky, torn between the charm of her new red shoes and the overwhelming size of the universe. 'How many stars were in the sky? A million? A billion? Maybe the number was as big as infinity.' Friends, teachers, and family give Uma new ways to think about infinity--as an endless succession of ancestors, or as a noodle cut in half and in half again (Swiatkowska draws Uma cutting a python-sized noodle with a knife, demonstrating that things can become infinitely small, too). She struggles with the sheer enormity of the idea: 'Actually, my head was starting to hurt from all these thoughts.' It's not until Uma's grandmother notices her shoes that Uma can make infinity her own: '[M]y love for her was as big as infinity.' Hosford's (Big Bouffant) story is as much a look into the interior life of a sensitive girl as it is a meditation on a mathematical concept--a task for which Swiatkowska's (This Baby) idiosyncratic portraits are perfectly suited." --Publishers Weekly

So innocuous-looking a symbol, that recumbent numeral eight. But for the little girl Uma, pondering the deep night sky (during a bout of sleeplessness brought on my the excitement of a new pair of red shoes), the concept of infinity is elusive, intimidating, and even a little bit scary. The next day she asks classmates, relatives, and acquaintances how they would express their understanding of infinity, and their range of answers, from sensible to poetic, provides the child--and readers of any age--a way to master the idea. For Grandma, infinity is a family extending limitless generations into the future. For Uma's friend Samantha, it's a racetrack you can drive around forever. For the school cook, it's endless divisibility: "In your mind...could you cut that tiny piece of noodle in half forever?" Uma's own attempt at imagining infinity begins with something she'd like to do forever--have recess--and ends with the vague worry that eternal recess might be a paradox: "If there's no school before recess, and no school after recess, is it really recess anymore?" Uma admits that these thoughts make her head hurt, and her pleasure at having Grandma notice and compliment her new red shoes brings her (and audiences') musings back down to stable, solid, comforting Earth. Swiatkowska's imaginative artwork combines the free-wheeling, slightly eerie absurdity of Monty Python animations, the formality of nineteenth-century decorative patterning, and the playful nerdiness of Leonardo da Vinci-styled inventions. For math and language arts teachers in search of circular common ground, ∞ marks the spot."--The Bulletin of the Center for Children's Books

"At a certain stage, children migrate onward to googolplex and infinity, concepts so unfathomable they practically pulsate with magic. Darkly illustrated with an undercurrent of almost existential angst, this smart book follows pensive 8-year-old Uma, who wonders, upon viewing the stars, 'How could I even think about something as big as infinity?' Swiatkowska's Victorian-style drawings are vaguely reminiscent of Edward Gorey, and Hosford effectively reflects the ways in which young children might grapple with, and come to some understanding of, such an impenetrable notion. Parents may still be adrift." --The New York Times Book Review

After the sight of a night sky filled with stars makes eight-year-old Uma feel very small, she asks people how they think about infinity and gets a variety of answers before realizing the comfort in knowing that some things go on forever.

1. Infinity and Me (Carolrhoda Picture Books)

2. Infinity and Me (Carolrhoda Picture Books)

3. Infinity and Me (Carolrhoda Picture Books)

4. Infinity and Me (Carolrhoda Picture Books)

5. Infinity and Me (Carolrhoda Picture Books)

6. Infinity and Me (Carolrhoda Picture Books)

7. Infinity and Me (Carolrhoda Picture Books)

8. Infinity and Me (Carolrhoda Picture Books)

9. Infinity and Me (Carolrhoda Picture Books)

10. Infinity And Me Library Edition (Hardback)

Buchbeschreibung Lerner Publishing Group, United States, 2012. Hardback. Zustand: New. Language: English. Brand new Book. When I looked up, I shivered. How many stars were in the sky? A million? A billion? Maybe the number was as big as infinity. I started to feel very, very small. How could I even think about something as big as infinity? Uma can't help feeling small when she peers up at the night sky. She begins to wonder about infinity. Is infinity a number that grows forever? Is it an endless racetrack? Could infinity be in an ice cream cone? Uma soon finds that the ways to think about this big idea may just be . . . infinite. Bestandsnummer des Verkäufers AAC9780761367260