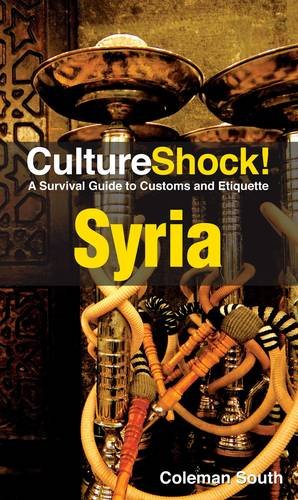 CultureShock! Syria is the handy reference to discovering this unique land that boasts a pleasant Mediterranean climate, a rich ancient heritage and a strategic location in the Middle East. Despite the semblance of modern Western civilisation, the country s strong religious beliefs and Eastern traditions still hold fast. Learn from shared personal experience how best to deal with bureaucracy, how to cope with unwanted attention as well as receive a crash course on the do s and don ts in social customs, relationships, food, entertaining, doing business and health hazards. CultureShock! Syria also explains the people s attitude to life and explores the beauty of the land so you can relax from the stress of fitting in and enjoy the vibrant cultural kaleidoscope that is Syria.. NOTA: El libro no está en espańol, sino en inglés.

Coleman South was raised in the western part of the United States and lived there until his early 40s, when he moved to Damascus, Syria. He earned a bachelor s degree in psychology in 1973, then worked in various occupations and professions over the next 17 years. He has always had a great desire to travel and live abroad, so in 1990 he left the bank where he was a vice-president and began work on a master s degree to teach English as a second language. He has taught English in the United States and Syria, and has lived in Japan for more than 12 years and is Associate Professor of EFL at a university in southern Japan. He has also travelled in nearly 20 European, Middle Eastern and other Asian countries, and most of North America. Coleman has written and published an illustrated book on Syria (Cultures of the World: Syria), another of the same on Jordan (Cultures of the World: Jordan recently revised), another on US-Japanese comparative culture for Japanese students, a cultural guide for international students studying at the university where he taught in the United States, numerous travel and professional (English teaching) articles, poetry and short stories