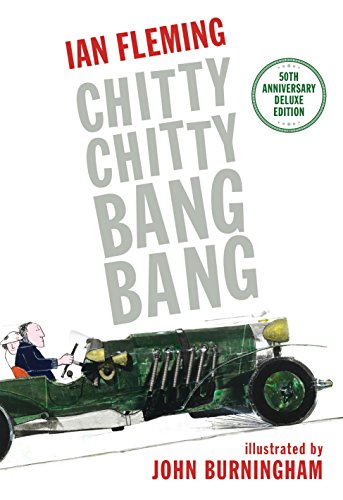 There's no improving on perfection--in this case Fleming's adventure story (featuring the unconventional family Pott and their magically refurbished motorcar) with the original, transcendent Burningham illustrations, first published in 1964. The confiding informality of the storyteller's voice; the nonstop and immensely child-pleasing adventures; the spunk of young Jeremy and Jemima; and of course the ingenious personality of Chitty-Chitty-Bang-Bang herself--all combine to make an ideal family read-aloud. This handsome fiftieth-anniversary gift edition is ... so very welcome.
--Horn Book

This is why the book holds up, 50 years after its original publication: its sense of the world as an inexplicable but also miraculous place.
--Los Angeles Times Online Reseņa del editor:

Famous for creating James Bond, Ian Fleming also loved fast cars — and this passion inspired him to write his only children’s book, penned for his young son, Caspar. Published fifty years ago in 1964, Chitty Chitty Bang Bang: The Magical Car introduced the world to the thrilling adventures of the “crackpot” Pott family and the flying car with a mind of her own. Chitty Chitty Bang Bang became an instant bestseller that has been reinvented as a musical and a film (with a screenplay co-written by Roald Dahl) and has also inspired three sequels written by Frank Cottrell Boyce. To honor half a century of Chitty Chitty Bang Bang, Candlewick Press presents a full-color gift edition ready to zoom straight into hearts of a new generation.