Metric Units and Conversion Charts: A Metrication Handbook for Engineers, Technologists and Scientists 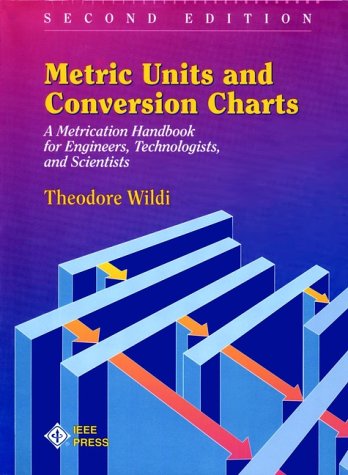 Metric Units and Conversion Charts A Metrication Handbook for Engineers, Technologists, and Scientists Second Edition Why waste your valuable time hunting for conversion factors, symbols, and units? With this handbook, you can convert from one measurement system to any other by means of 62 conversion charts covering almost every field of science. The charts are based on values published by the foremost authoritative sources such as the American National Standards Institute (ANSI), the International Organization for Standardization (ISO), and the Institute of Electrical and Electronics Engineers, Inc. (IEEE). The charts are universal, and so conversions can be made quickly and confidently. This much-expanded second edition has the following features: The charts make a clear distinction between SI and other metric units by identifying SI units by red boxes. Official symbols of all SI units are given, along with the name of the unit. The recommended symbols for quantities are shown at the top of each chart. A new chapter on mass, force and gravity explains how the units of force were established. For introductory courses, chapters are included explaining quantity equations and numerical equations, together with worked-out examples. For classroom work, over 100 review questions, together with answers.

Theodore Wildi is a professional engineer, Senior Member of the Institute of Electrical and Electronics Engineers, and member of The American Society for Engineering Education. In Canada, he is Chair of the CSA Technical Committee on the International System of Units and Chair of the CAC/ISO/TC12 Committee on Quantities, Units, and Conversion Factors. In the United States, he serves as a member of the IEEE Standards Coordinating Committee 14 on Quantities, Units, and Letter Symbols. Mr. Wildi has written several books on electric power and is Professor Emeritus of Laval University. He was awarded the IEEE Centennial Medal and is a recipient of the General A.G.L. McNaughton Award.