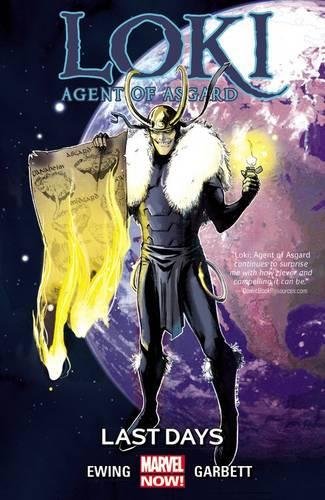 He's Loki's older, nastier, vastly more powerful future self. His machinations have cost Loki everything... but who IS King Loki? What kingdom would have him? What dread Asgard is he the Agent of? And what evil scheme has he been brewing all this time? Loki began his third life by annihilating the soul of his second - his better, purer self. Now he pays the price.

Al Ewing is a massively talented young writer whose work for "2000 AD" has seen him hailed as a major voice in the field, bringing both fresh characters, a keen sense of comedy and a startling inventiveness to the comics scene. The Zaucer of Zilk, 2000 AD/idw was acclaimed as one of the best comics of 2012, and his 2013 projects are sure to lift him even higher.

Henry Flint is one of the 2000 AD's superstars. Co-creater of "Sancho Panzera" and "Shakara, "his incredibly versatile pencils have also graced "A.B.C Warriors, Judge Dredd/ Aliens, Bill Savage, Deadlock Judge Dredd, Rogue Tropper, Missionary Man, Nemesis the Warlock, Nikolai Dante, Sinister Dexter, Tharg the Mighty, The V.C.'s Vector 13 "and" Venus Bluegenes. "He has even written a "Tharg's Alien Invasions" strip! He has also begun to establish himself in American comics. In 2004 Flint was recipient of the award for best artist at the National Comic Awards.

Lee Garbett is one of DC's hot new artists. He has worked on Midnighter, The Highwaymen and Dreamwar at Wildstorm, and the Outsiders, Batman Last Rites and currently Batgirl at DC. In the UK he started out on 2000 AD; other clients include the BBC, The Face, and American Express. He lives in Devon, UK.