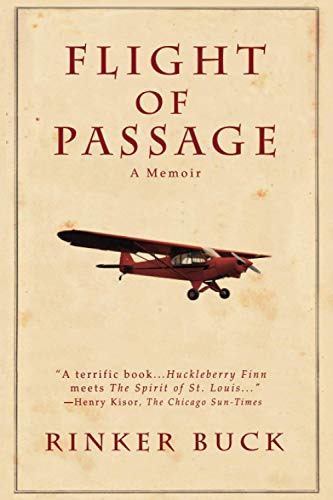 The author describes how he and his brother, then teenagers, piloted a plane across the United States and how their landmark flight drew them closer to each other and to their father, a stunt flyer. Reprint.. NOTA: El libro no está en espańol, sino en inglés.

Rinker Buck began his career as a reporter for The Berkshire Eagle in western Massachusetts. He then worked for New York, Life, and Adweek magazines, and his articles and columns have appeared in numerous national magazines and newspapers. Flight of Passage is his first book. He and his wife, Amelia de Neergaard, live with their two daughters in Cornwall, Connecticut.

Buchbeschreibung Paperback. Zustand: New. Reprint. Language: English. Brand new Book. In the Summer of 1966, Rinker and Kernahan Buck - two teenaged schoolboys from New Jersey - bought a dilapidated Piper Cub airplane for $300, rebuilt it, and piloted it on a record breaking flight across America - navigating all the way to California without a radio, because they couldn't afford one. Their trip retraced a mythical route flown by their father, Tom Buck, a brash, colorful ex-barnstormer who had lost a leg in a tragic air crash before his sons were born - but who so loved the adventure of flight that he taught his boys to fly before they could drive. The journey west, and the preparations for it, become a figurative and literal process of discovery; as the young men battle thunderstorms and wracking turbulence and encounter Arkansas rednecks, Texas cowboys, and the languid, romantic culture of smalltown cafes, cheap motels, and dusty landing strips of pre-Vietnam America. The brothers have a lot to resolve among themselves, too - as Kern, the meticulous, dedicated visionary; and Rinker, the rebellious second son, must finally come to understand and depend on each other in the complex way that only brothers can. Most of all, Flight of Passage is a timeless story of fathers and sons. These two young men must separate from their difficult, quirky father - literally by putting a country's distance between them - but they do it on their father's terms: in an airplane. As he looks back from the perspective of now being a father himself, Rinker Buck's tale of two young men in search of themselves and their country becomes a book about the eternal enigma of family - of the distance and closeness of generations, of peace lost so that understanding can be gained - and it is exploredwith a storytelling power that is both brave and rare. Bestandsnummer des Verkäufers APC9780786883158

2. Flight of Passage: A Memoir

3. Flight of Passage (Paperback or Softback)

4. Flight of Passage: A Memoir

5. Flight of Passage : A Memoir

7. Flight of Passage: A Memoir

8. Flight of Passage : A Memoir

9. Flight of Passage: A Memoir

10. Flight of Passage: A Memoir