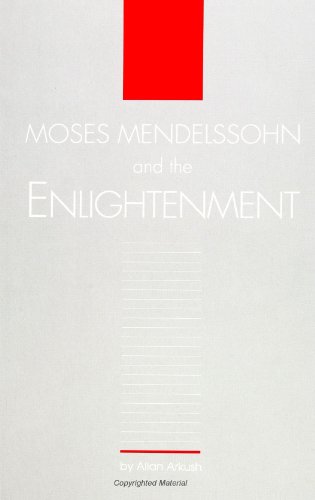 "The author approaches Mendelssohn from a new and critical angle. He makes a convincing argument that Mendelssohn was a modern radical who aimed for a transformation of traditional Judaism but made sure to appear in the guise of a conservative. This is argued with intellectual subtlety and philosophic breadth, impressive scholarly competence, and literary finesse.The topic delves into two still hotly debated issues: the nature of the Enlightenment and of modernity, and the historical importance of Mendelssohn and all that he meant for the emergence of modern Judaism. It is also an important topic in itself insofar as recent Jewish thinkers and scholars have begun to ask new questions about the true character of modern Jewish thought. Here the stature of Mendelssohn as the first great modern Jewish thinker has remained high and yet his stature has also always been controversial. The author, who appreciates the achievement of Mendelssohn, helps set proper limits to reverence for his profundity as a thinker." -- Kenneth Hart Green, University of Toronto

"Possessed of a thorough knowledge of Mendelssohn and the tradition of Mendelssohn scholarship, Arkush is able to propose a new account of the central question facing all the interpretations of this important and enigmatic figure: what is the relation between Mendelssohn's philosophical rationalism and his Judaism? Arkush's answer to this question is original and the most satisfying of any yet put forward. He approaches the problem through examining the premises and argumentation in three areas of Mendelssohn's work: metaphysics and natural theology, political philosophy or foundations of liberal politics, and Judaism and the account of revealed religion. Arkush, in very subtle fashion, discloses how the conflicting requirements of these central concerns result in the distinctive, and somewhat unstable, project of transforming Judaism into a civil religion compatible with the Enlightenment." -- Richard Velkley, Stonehill College Reseńa del editor:

Moses Mendelssohn, the author of numerous works on natural theology and ethics, was also the first modern philosopher of Judaism. This book places Mendelssohn's thought within the context of the Leibnizian-Wolffian school, the writings of Kant and Lessing and other major figures of the Enlightenment, and within the age-old tradition of Jewish rationalism. More than any previous treatment of this subject, it questions the extent to which Mendelssohn truly succeeded in reconciling his allegiance to the philosophy of the Enlightenment with his adherence to Judaism.

1. Moses Mendelssohn and the Enlightenment -