Ovid, Ave The Metamorphoses of Ovid

The Metamorphoses of Ovid 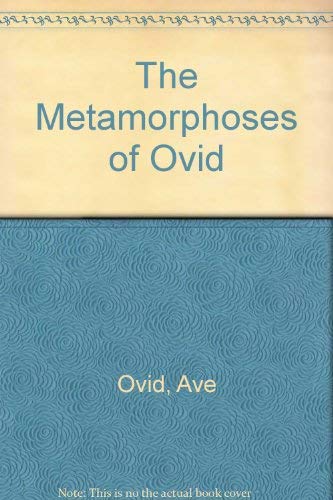 "The mark of success in a poet's career", writes David Slavitt, "was an epic that might stand on the shelf alongside Virgil's. But how was a poet like Ovid, with a more intimate, livelier, funnier and more self-mocking sensibility, to attempt such a thing? The epic form was not, I think, immediately congenital, and my guess is that Ovid recognized this himself. Accordingly, he transformed the epic, playing against its grain a lot of the time, and escaping its severe organizational and thematic demands by transforming it into something altogether different. The first metamorphosis, then, is of the idea of the epic itself". Written between AD 2 and 8, Ovid's long poem the "Metamorphoses" gave to a great number of Greek and Roman myths the form in which they are known today. David Slavitt, translator of "Ovid's Poetry of Exile", has fashioned a new English verse translation of what is perhaps the best known work of one of western civilization's major poets. In Slavitt's freely inventive but emotionally accurate renderings, the voice of Ovid speaks again to a new generation of readers.

1. The Metamorphoses of Ovid

Buchbeschreibung The Johns Hopkins University Press, 1994. Zustand: Good. Shows some signs of wear, and may have some markings on the inside. Bestandsnummer des Verkäufers GRP116403791

2. The Metamorphoses of Ovid

Buchbeschreibung The Johns Hopkins University Press, 1994. Zustand: Good. A+ Customer service! Satisfaction Guaranteed! Book is in Used-Good condition. Pages and cover are clean and intact. Used items may not include supplementary materials such as CDs or access codes. May show signs of minor shelf wear and contain limited notes and highlighting. Bestandsnummer des Verkäufers 0801847974-2-4

3. The Metamorphoses of Ovid

4. The Metamorphoses of Ovid