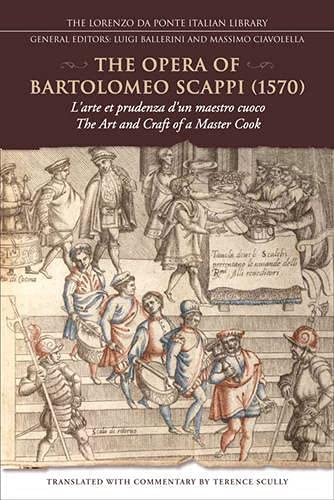 'Terence Scully has done a beautiful job preparing this book. This is the first translation into English; it is highly readable, and many fans of cooking will enjoy sifting through its voluminous entries ... With a number of books on the history of cuisine to his credit, Terence Scully ... is, beyond question, a culinary expert.' -- Robert Applebaum 'Scully's volume makes a monumental contribution to the burgeoning field of Renaissance and early modern food studies and ... has much to contribute to contemporary discussions of material and cultural history.' -- Deborah L. Krohn '[The Opera of Bartolomeo Scappi] provides information on hundreds of topics ranging from how to prepare frog's legs for popes to the preparation of pickled tuna and a potion of dried figs, jujubes, currants, and liquorice for the sick. The detailed annotation makes this a valuable source of factual information that can illumine the whole world of late medieval and Renaissance cookery.' -- Medium Aerum

Bartolomeo Scappi (c. 1500-1577) was arguably the most famous chef of the Italian Renaissance. He oversaw the preparation of meals for several Cardinals and was such a master of his profession that he became the personal cook for two Popes. At the culmination of his prolific career he compiled the largest cookery treatise of the period to instruct an apprentice on the full craft of fine cuisine, its methods, ingredients, and recipes. Accompanying his book was a set of unique and precious engravings that show the ideal kitchen of his day, its operations and myriad utensils, and are exquisitely reproduced in this volume. Scappi's Opera presents more than one thousand recipes along with menus that comprise up to a hundred dishes, while also commenting on a cook's responsibilities. Scappi also included a fascinating account of a pope's funeral and the complex procedures for feeding the cardinals during the ensuing conclave. His recipes inherit medieval culinary customs, but also anticipate modern Italian cookery with a segment of 230 recipes for pastry of plain and flaky dough (torte, ciambelle, pastizzi, crostate) and pasta (tortellini, tagliatelli, struffoli, ravioli, pizza). Terence Scully presents the first English translation of the work. His aim is to make the recipes and the broad experience of this sophisticated papal cook accessible to a modern English audience interested in the culinary expertise and gastronomic refinement within the most civilized niche of Renaissance society.