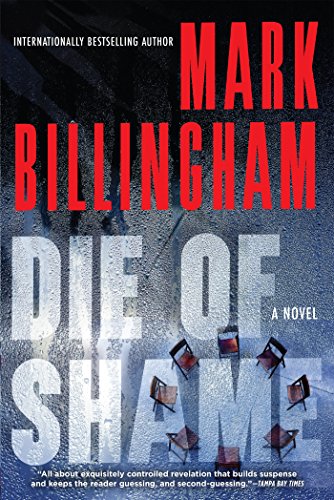 Praise for Die of Shame

One of Strand Magazine's top ten books of 2016 Longlisted for the 2017 Theakstons Old Peculier Crime Novel of the Year "Before turning to writing crime fiction full time 15 years ago, Billingham was a TV writer, actor and standup comedian. In those prior professions, he seems to have honed a beautiful sense of timing. Die of Shame is all about exquisitely controlled revelation that builds suspense and keeps the reader guessing, and second-guessing."--Colette Bancroft, Tampa Bay Times "Brilliant . . . A read-till-you-drop psychological mystery driven by some of the most intriguing characters you'll meet."--Globe & Mail (Toronto) "A laser-sharp focus on the world's worst therapy group . . . A boiling Petri dish of alliances forged, strained, and broken amid the background of nonstop, sometimes knife-edged conflict. The solution, when it arrives, is satisfying enough. But it's the group portrait of the Monday-night therapy group, the most mismatched set of intimates since your own last family gathering, that lingers longest in the memory."--Kirkus Reviews "Shifting between past group sessions and Tanner's present-day investigation, Billingham builds a complex plot that is as much a whodunit as it is an examination of addiction and the lies people tell themselves to survive."--Publishers Weekly "Very cleverly constructed . . . A terrific and unconventional addition to Billingham's oeuvre, packed with colourfully drawn, wittily observed characters who never lapse into stereotypes."--Irish Independent "Billingham skillfully layers the deceits and betrayals concealing a satisfying twist. A must-read for Val McDermid fans."--Booklist "Mark Billingham is an outstanding writer of character-driven suspense, and Die of Shame is his best book yet . . . A complex, satisfying read!"--Carol Schneck Varner, Schuler Books, Michigan Praise for Mark Billingham: "Billingham is one of the most consistently entertaining, insightful crime writers working today."--Gillian Flynn "Billingham is a world-class crime writer."--Karin Slaughter "With each of his books, Mark Billingham gets better and better. These are stories and characters you don't want to leave."--Michael Connelly "Billingham is one of the best crime novelists working today."--Laura Lippman "Mark Billingham has brought a rare and welcome blend of humanity, dimension, and excitement to the genre."--George Pelecanos Reseńa del editor:

From a master of the genre, Die of Shame is a chilling story of addiction, subterfuge, and murder.

Every Monday evening, six people gather in a smart North London house to talk about shame. A respected doctor, a well-heeled housewife, a young gay man, a supermarket cashier—these individuals could not be more different. All they have in common is a history of pain and addiction. But when one member of the group is murdered, it quickly becomes apparent that someone else in the circle is responsible. The investigation is hampered by the strict confidentiality that binds these people and their therapist together, making things difficult for Detective Inspector Nicola Tanner. If she is to find the killer in this case, she will need to use more inventive methods. The question is: What could be shameful enough to cost someone their life? And how do you find the truth when secrets, lies, and denial are second nature to all of your suspects?