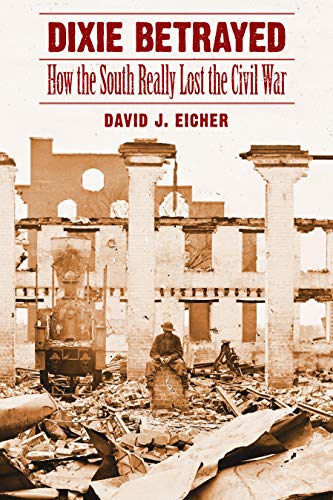 "Much ink has been spilled debating the question of why the South lost the Civil War. Eicher offers his own significant analysis of what he views as the central issue: how the Confederacy shot itslef in the foot because its leaders together ... founded an imperfect union, and together they destroyed it."-Booklist Booklist "Eicher turns to the personalities and politics of the Confederate government to explore and explain the South's failure to win its independence... Students of the Confederacy and the Civil War will appreciate Eicher's vignettes of secessionists, generals, and Confederate cabinet officers."-Library Journal Library Journal "Eicher's previous Civil War books are military histories, and his martial knowledge shows in Dixie Betrayed. He contrasts broad-stroke depictions of brutal battles and mounting Southern casualties with the Confederate government's apparent obliviousness of its need for unity."-Christine Gibson, American Heritage -- Christine Gibson American Heritage "David Eicher's Dixie Betrayed is a provocative new examination of the internal conflicts that doomed the Confederacy. In a swiftly paced narrative, Eicher offers astute profiles of Confederate leaders and makes a compelling case for the destructive power of states' rights that ultimately led to the defeat of the Southern nation. This book will rekindle vital arguments about the Confederate saga."-Jeffry D. Wert, author of The Sword of Lincoln -- Jeffry D. Wert

For more than a century, conventional wisdom has held that the South lost the Civil War because of bad luck and overwhelming Union strength. The politicians and generals on the Confederate side have been lionized as noble warriors who bravely fought for states' rights. But in Dixie Betrayed, historian David J. Eicher reveals the real story, a calamity of political conspiracy, discord, and dysfunction that cost the South the Civil War. Drawing on a wide variety of previously unexplored sources, Eicher shows how President Jefferson Davis viciously fought with the Confederate House and Senate, state governors, and his own cabinet. Some Confederate senators threatened one another with physical violence; others were hopeless idealists who would not bend even when victory depended on flexibility. Military commanders were assigned not on the basis of skill but because of personal connections. Davis frequently interfered with his generals, micromanaging their field campaigns, ignoring the chain of command, and sometimes trusting utterly incompetent men. Even more problematic, some states wanted to set themselves up as separate nations, further undermining a unified war effort. Tensions were so extreme that the vice president of the Confederacy refused to live in the same state as Davis. Dixie Betrayed blasts away previous myths about the Civil War. It is essential reading for Civil War buffs and for anyone interested in how governments of any age can self-destruct during wartime.

1. Dixie Betrayed: How The South Really Lost The Civil War