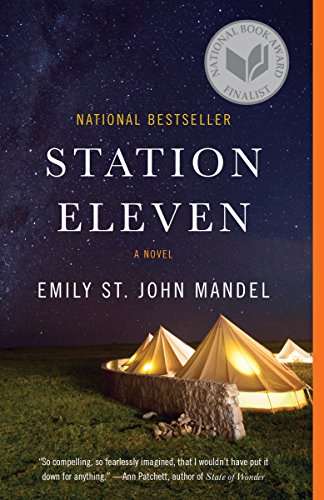 Críticas:
One of the Best Books of the Year: The Washington Post, San Francisco Chronicle, Chicago Tribune, Buzzfeed, and Entertainment Weekly, Time, Milwaukee Journal Sentinel, Minnesota Public Radio, The Huffington Post, BookPage, Time Out, BookRiot
"Station Eleven is so compelling, so fearlessly imagined, that I wouldn't have put it down for anything."
-- Ann Patchett "A superb novel . . . [that] leaves us not fearful for the end of the word but appreciative of the grace of everyday existence." --San Francisco Chronicle

"Deeply melancholy, but beautifully written, and wonderfully elegiac . . . A book that I will long remember, and return to."
-- George R. R. Martin "Absolutely extraordinary." --Erin Morgenstern, author of The Night Circus
"Darkly lyrical. . . . A truly haunting book, one that is hard to put down." --The Seattle Times "Tender and lovely. . . . Equal parts page-turner and poem."--Entertainment Weekly "Mesmerizing." -- People "Mandel delivers a beautifully observed walk through her book's 21st century world.... I kept putting the book down, looking around me, and thinking, 'Everything is a miracle.'"--Matt Thompson, NPR

"My book of the year."--Karen Joy Fowler, author of We Are All Completely Beside Ourselves

"Station Eleven is the kind of book that speaks to dozens of the readers in me--the Hollywood devotee, the comic book fan, the cult junkie, the love lover, the disaster tourist. It is a brilliant novel, and Emily St. John Mandel is astonishing." --Emma Straub, author of The Vacationers

"Think of Cormac McCarthy seesawing with Joan Didion. . . . Magnetic." --Kirkus (starred) "Even if you think dystopian fiction is not your thing, I urge you to give this marvelous novel a try. . . . [An] emotional and thoughtful story." --Deborah Harkness, author of The Book of Life

"It's hard to imagine a novel more perfectly suited, in both form and content, to this literary moment. Station Eleven, if we were to talk about it in our usual way, would seem like a book that combines high culture and low culture--"literary fiction" and "genre fiction." But those categories aren't really adequate to describe the book" --The New Yorker

"Audacious. . . . A book about gratitude, about life right now, if we can live to look back on it." --Minneapolis Star-Tribune

"A surprisingly beautiful story of human relationships amid devastation." --The Washington Post "Soul-quaking. . . . Mandel displays the impressive skill of evoking both terror and empathy." --Los Angeles Review of Books

"A genuinely unsettling dystopian novel that also allows for moments of great tenderness. Emily St. John Mandel conjures indelible visuals, and her writing is pure elegance." --Patrick deWitt, author of The Sisters Brothers "Possibly the most captivating and thought-provoking post-apocalyptic novel you will ever read." --The Independent (London) "A firework of a novel . . . full of life and humanity and the aftershock of memory." --Lauren Beukes, author of The Shining Girls "One of the best things I've read on the ability of art to endure in a good long while." --Tobias Carroll, Electric Literature

"A big, brilliant, ambitious, genre-bending novel. . . . Hands-down one of my favorite books of the year." --Sarah McCarry, Tor.com

"Strange, poetic, thrilling, and grim all at once, Station Eleven is a prismatic tale about survival, unexpected coincidences, and the significance of art." --Bustle, "Best Book of the Month" "Disturbing, inventive and exciting, Station Eleven left me wistful for a world where I still live." --Jessie Burton, author of The Miniaturist
Reseńa del editor:
One snowy night Arthur Leander, a famous actor, has a heart attack onstage during a production of "King Lear." Jeevan Chaudhary, a paparazzo-turned-EMT, is in the audience and leaps to his aid. A child actress named Kirsten Raymonde watches in horror as Jeevan performs CPR, pumping Arthur's chest as the curtain drops, but Arthur is dead. That same night, as Jeevan walks home from the theater, a terrible flu begins to spread. Hospitals are flooded and Jeevan and his brother barricade themselves inside an apartment, watching out the window as cars clog the highways, gunshots ring out, and life disintegrates around them. Fifteen years later, Kirsten is an actress with the Traveling Symphony. Together, this small troupe moves between the settlements of an altered world, performing Shakespeare and music for scattered communities of survivors. Written on their caravan, and tattooed on Kirsten's arm is a line from "Star Trek: " "Because survival is insufficient." But when they arrive in St. Deborah by the Water, they encounter a violent prophet who digs graves for anyone who dares to leave. Spanning decades, moving back and forth in time, and vividly depicting life before and after the pandemic, this suspenseful, elegiac novel is rife with beauty. As Arthur falls in and out of love, as Jeevan watches the newscasters say their final good-byes, and as Kirsten finds herself caught in the crosshairs of the prophet, we see the strange twists of fate that connect them all.

A novel of art, memory, and ambition, "Station Eleven" tells a story about the relationships that sustain us, the ephemeral nature of fame, and the beauty of the world as we know it.