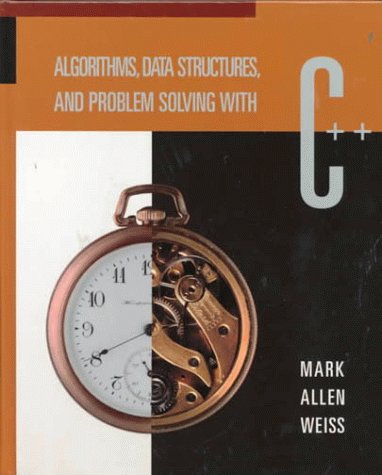 Experienced author and teacher Mark Allen Weiss now brings his expertise to the CS2 course with Algorithms, Data Structures, and Problem Solving with C++, which introduces both data structures and algorithm design from the viewpoint of abstract thinking and problem solving. The author chooses C++ as the language of implementation, but the emphasis of the book itself remains on uniformly accepted CS2 topics such as pointers, data structures, algorithm analysis, and increasingly complex programming projects.Algorithms, Data Structures, and Problem Solving with C++ is the first CS2 textbook that clearly separates the interface and implementation of data structures. The interface and running time of data structures are presented first, and students have the opportunity to use the data structures in a host of practical examples before being introduced to the implementations. This unique approach enhances the ability of students to think abstractly.Features * Retains an emphasis on data structures and algorithm design while using C++ as the language of implementation. * Reinforces abstraction by discussing interface and implementations of data structures in different parts of the book. * Incorporates case studies such as expression evaluation, cross-reference generation, and shortest path calculations. * Provides a complete discussion of time complexity and Big-Oh notation early in the text. * Gives the instructor flexibility in choosing an appropriate balance between practice, theory, and level of C++ detail. Contains optional advanced material in Part V. * Covers classes, templates, and inheritance as fundamental concepts in sophisticated C++ programs. * Contains fully functional code that has been tested on g++2.6.2, Sun 3.0.1, and Borland 4.5 compilers. Code is integrated into the book and also available by ftp. * Includes end-of-chapter glossaries, summaries of common errors, and a variety of exercises. 0805316663B04062001

Mark Allen Weiss is a Professor in the School of Computer Science at Florida International University. He received his Ph.D. in Computer Science from Princeton University where he studied under Robert Sedgewick. Dr.Weiss has received FIU's Excellence in Research Award, as well as the Teaching Incentive Program Award, which was established by the Florida Legislature to recognize teaching excellence. Mark Allen Weiss is on the Advanced Placement Computer Science Development Committee. He is the successful author of Algorithms, Data Structures, and Problem Solving with C++ and the series Data Structures and Algorithm Analysis in Pascal, Ada, C, and C++, with Addison-Wesley. 0805316663AB04062001