Female Submission: The Journals of Madeline 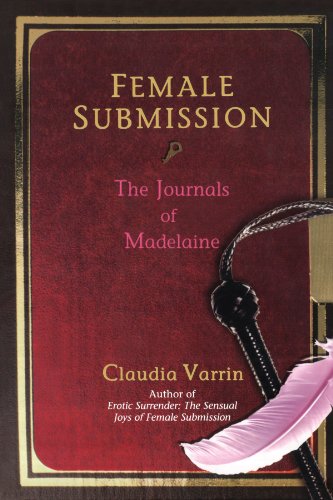 A modern-day Story of O Under the tutelage of an experienced British master, Claudia Varrin-as the slave "Madelaine"-relinquished her whip to explore the deepest heart of surrender. What she found was a level of sexual exhilaration beyond anything she'd even imagined. Here is her moment-to-moment journal as she enters the downward spiral necessary to bare her soul and debase herself for her master. Madelaine's experiences were extremely wild, edgy, and on the most advanced level of play: private fantasy enactments, public scenes in nightclubs, frolics both fun and fearsome at exclusive dungeon parties-almost nothing was off-limits. Madelaine found her sexual boundaries pushed further and further as she accessed desires unknown even to herself. Exploring her submissive nature and her emotions more deeply, she was changed into one who would do anything for her cruel, handsome master, ultimately striving to make his base and often savage desires her own. Read as a vicarious pleasure, a primer of new fantasies, or as a companion to Varrin's Erotic Surrender, this sexy volume is a must for everyone who is captivated by the outer limits of human sexuality and pleasure. Claudia Varrin is an active and well-known member of the worldwide fetish underground. The author of The Art of Sensual Female Dominance, Erotic Surrender, Female Dominance: Rituals and Practices, and The Female Dominant: Games She Plays, she travels frequently to gatherings of the erotically open-minded in the United States and Europe. She currently lives in New York City. Visit her website at www.claudiavarrin.com. Master And Servant He was all she could have hoped for: an extremely experienced, romantically sadistic, cruelly imaginative dominant male-who made her fall to her knees. Handsome in a rugged way with long straight hair and green eyes, he could pin her to the wall with just one look. More than anything, his swift brutality for her infractions brought to mind the ultimate master of uninhibited depravity, the Marquis de Sade. . . . This is the true story of Claudia Varrin, author of Erotic Surrender: The Sensual Joys of Female Submission-a candid, raw, unflinching account of ultimate surrender. Praise for Claudia Varrin The Art of Sensual Female Dominance: A Guide for Women "Proves that the skills of dominance are easily within reach of any adventurous woman." -Lisa Sherman, Skin Two magazine Erotic Surrender: The Sensual Joys of Female Submission "Varrin vividly communicates the delight that can be found in the delicious depravity of sensual submission."-Lisa Sherman, Skin Two magazine Female Dominance: Rituals and Practices "Thoroughly recommended."-Helen Lane, Skin Two magazine The Female Dominant: Games She Plays "Highly recommended."-Zak Jane Keir, Desire magazine

1. Female Submission: The Journals of Madelaine