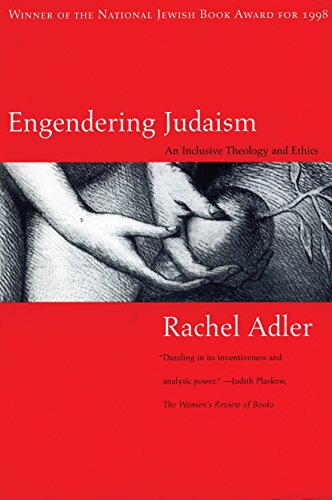 [Engendering Judaism] is dazzling in its inventiveness and analytic power. --Judith Plaskow, The Women's Review of Books

"Summarizing the thinking of a lifetime, Engendering Judaism is the first major work of feminist Jewish theology since Plaskow's Standing Again at Sinai." --Alicia Ostriker, Lilith "Rachel Adler has written not only the most sophisticated and important book in the field of Jewish feminist thought but a study that can serve as a model for all feminist theological writings. . . . Her work brings us to a higher level of sophistication that will undoubtedly inspire fascinating discussion among Jewish feminists and offer some serious challenges to Christian feminists." --Susannah Heschel, Journal of the American Academy of Religion "Rachel Adler has finally published what will surely be the major text of the new Jewish feminism. Her experience and her vision are synoptic, always reverencing tradition, but solidly feminist in spirit and ecumenical in tone." --Arnold Jacob Wolf, Judaism "[Adler's] goal is not judgment and condemnation, but rather restoration and transmutation. 'Engendering Judaism' means for Adler the identification and development of transformative resources within the Jewish tradition in a shared, communal process, with women and men working together toward a more just future." --P. K. Steinfeld, Choice Reseńa del editor:

Winner of the National Jewish Book Award for 1998.

How can women's full participation transform Jewish law, prayer, sexuality, and marriage? What does it mean to "engender" Jewish tradition? Pioneering theologian Rachel Adler gives this timely and powerful question its first thorough study in a book that bristles with humor, passion, intelligence, and deep knowledge of traditional biblical and rabbinic texts.

4. Engendering Judaism: An Inclusive Theology and Ethics (Paperback or Softback)