Sade My Neighbor (Studies in Phenomenology and Existential Philosophy) 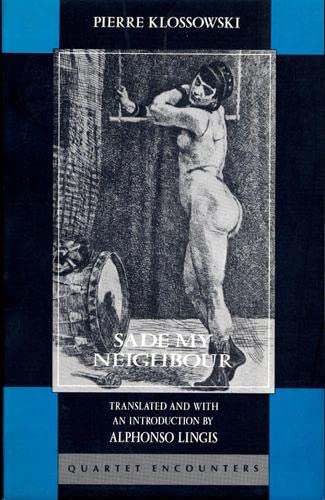 Enlightenment ideals of a society rooted in liberationist reason and morality were trampled in the wake of the savagery of the Second World War. That era's union of cold technology and ancient hatreds gave rise to a dark, alternative reason--an ethic that was value-free and indifferent with regard to virtue and vice, freedom, and slavery. In a world where "the unthinkable" had become reality, it is small wonder that theorists would turn to the writings of a man whose eighteenth-century imagination preceded twentieth-century history in its unbridled exploration of viciousness, perversion, and monstrosity: the Marquis de Sade.

Klossowski was one of the first philosophers in postwar Europe to ask whether Sade's reason, although aberrant and perverted to evil passions, could be taken seriously. Klossowski's seminal work inspired virtually all subsequent study of Sadean thought, including that of de Beauvoir, Deleuze, Derrida, Bataille, Blanchot, Paulhan, and Lacan.

This first English-language translation captures the excitement of the original text-already a contemporary classic, and will likely become a standard reference in the history of eighteenth-century thought, politics, and society, and in the philosophy of love, sexuality, and feminism.

2. Sade My Neighbor (Northwestern University Studies in Phenomenology and Existen)

3. Sade My Neighbor (Studies in Phenomenology and Existential Philosophy)

4. Sade My Neighbor (Studies in Phenomenology and Existential Philosophy)

5. SADE MY NEIGHBOR (STUDIES IN PHE