Verwandte Artikel zu My Life as a Mankiewicz: An Insider's Journey Through...

Mankiewicz, Tom; Crane, Robert My Life as a Mankiewicz: An Insider's Journey Through Hollywood (Screen Classics)

My Life as a Mankiewicz: An Insider's Journey Through Hollywood (Screen Classics) 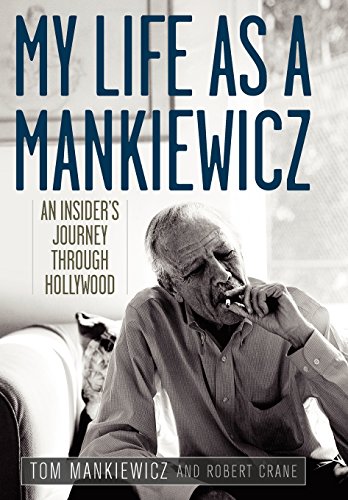 "...a treasure trove of observations and anecdotes about Hollywood from the 1960s to the 1980s and the people who made movies back then." Associated Press

Thomas F. Mankiewicz (1942 - 2010) was a genuine Hollywood royalty-the son of famed director and screenwriter Joe Mankiewicz and talented Austrian actress Rosa Stradner, as well as nephew to Citizen Kane (1941) screenwriter Herman Mankiewicz. Tom "Mank" Mankiewicz, however, made a film career of his own, succeeding as a screenwriter, director, and producer. Easy Writer is Mankiewicz's life as told to historian Robert Crane, a volume that gives readers a fascinating personal look into the life of an individual whose family connections may have led him to show business, but whose creativity and work ethics established him as a member of the Hollywood writing elite. In his memoir, Mankiewicz details his journey through the inner workings of the film industry, beginning with his first job as assistant director for the film The Comancheros (1961), starring John Wayne, describing his professional development as both a writer and director. In 1970, Mankiewicz joined his most recognized project after he was recruited to work on the screenplay for the seventh James Bond film, Diamonds are Forever (1971), an event that established him as a wide commercial success. He continued to work on Bond hits such as Live and Let Die (1973) and The Man with the Golden Gun (1974). Soon after, Mankiewicz helped to create another contemporary silver screen hero, working extensively on the scripts of Superman (1978) and Superman II (1980). Easy Writer details the ups and downs of Mankiewicz's personal life, exploring family tragedies such as his mother's schizophrenia and untimely death and his brother's ongoing struggle with financial debt. Mankiewicz discusses his friendships and romantic relationships with some of Hollywood's biggest names, and reveals his own issues with alcohol and drugs. With Crane's assistance, Mankiewicz's memoir gives an insider's perspective into the life of a commercial-oriented writer and the obstacles he encountered. His story not only serves as a tale of personal achievement, but also as an in-depth look into Hollywood during the 1960s and 1970s. Tom Mankiewicz (June 1, 1942 - July 31, 2010) was a screenwriter, director, and producer of motion pictures and television, perhaps best known for his work on the James Bond films and his contributions to Superman: The Movie (1978) and the television series, Hart to Hart (1978 - 1984). Robert Crane is coauthor of Things I've Said, But Probably Shouldn't Have: An Unrepentant Memoir (Wiley), author of Jack Nicholson: Face to Face (M. Evans & Co.) and a contributor to Hal Ashby: Interviews (Mississippi).

1. My Life as a Mankiewicz - An Insider s Journey through Hollywood

2. My Life as a Mankiewicz: An Insider's Journey through Hollywood (Screen Classics)

3. My Life as a Mankiewicz: An Insider's Journey through Hollywood (Hardback)

Buchbeschreibung The University Press of Kentucky, United States, 2012. Hardback. Zustand: New. Language: English. Brand new Book. The son of famed director and screenwriter Joseph L. Mankiewicz (All About Eve [1950], Guys and Dolls [1955], Cleopatra [1963]) and the nephew of Citizen Kane screenwriter Herman Mankiewicz, Tom Mankiewicz was genuine Hollywood royalty. He grew up in Beverly Hills and New York, spent summers on his dad's film sets, had his first drink with Humphrey Bogart, dined with Elizabeth Taylor and Richard Burton, went to the theatre with Ava Gardner, and travelled the world writing for Brando, Sinatra, and Connery. Although his family connections led him to show business, Tom "Mank" Mankiewicz forged a career of his own, becoming a renowned screenwriter, director, and producer of acclaimed films and television shows. He wrote screenplays for three James Bond films-Diamonds Are Forever (1971), Live and Let Die (1973), and The Man with the Golden Gun (1974)-and made his directorial debut with the hit TV series Hart to Hart (1979-1984). My Life as a Mankiewicz is a fascinating look at the life of an individual whose creativity and work ethic established him as a member of the Hollywood writing elite.Mankiewicz details his journey through the inner world of the television and film industries, beginning with his first job as production assistant on The Comancheros (1961), starring John Wayne. My Life as a Mankiewicz illuminates his professional development as a writer and director, detailing his friendships and romantic relationships with some of Hollywood's biggest stars as well as his struggle with alcohol and drugs. With the assistance of Robert Crane, Mankiewicz tells a story of personal achievement and offers an insider's view of the glamorous world of Hollywood during the 1960s, 1970s, and 1980s. Bestandsnummer des Verkäufers BZE9780813136059

4. My Life as a Mankiewicz: An Insider's Journey through Hollywood (Screen Classics)

5. My Life as a Mankiewicz