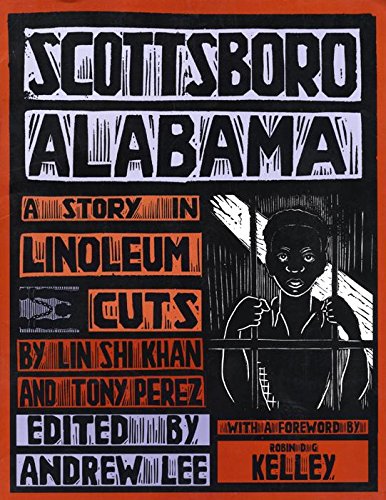 "A stunning artifact, Scottsboro, Alabama's narrative and images capture the tragedy of race in the American South. I haven't seen anything this tersely powerful in years." - Nell Irvin Painter,author of Sojourner Truth: A Life, A Symbol "Wow! This is political art at its most powerful. These evocative images outrage and provoke, leaving an indelible impression of an unjust world at an unjust time. Scottsboro, Alabama will incite you to join the struggle for racial equality and justice." -Alan Dershowitz,author ofSupreme Injustice "This extraordinary graphic book from 1935 reproduces 118 linocuts illustrating the history of African Americans up to and including the Scottsboro trials... the reproductions are excellent, and Lee and Robin D.G. Kelley provide background essays on the trials and the provenance of the book. A welcome addition to all collections... highly recommended." -Library Journal,starred review "The prints have tremendous visual power...they constitute a progenitor of the contemporary graphic novel that artistically outclasses most current examples of the genre." -Booklist (July 2002) "Scottsboro, Alabama...provides a unique graphic history of one of the most infamous, racially-charged episodes in the annals of American justice." -New Voice of New York

In 1931, nine black youths were falsely accused of raping two white women on a freight train traveling through northern Alabama. They were arrested and tried in four days, convicted of rape, and eight of them were sentenced to death. The ensuing legal battle spanned six years and involved two landmark decisions by the Supreme Court. One of the most well known and controversial legal decisions of our time, the Scottsboro case ignited the collective emotions of the country, which was still struggling to come to terms with fundamental issues of racial equality. Scottsboro, Alabama, which consists of 118 exceptionally powerful linoleum prints, provides a unique graphic history of one of the most infamous, racially-charged episodes in the annals of the American judicial system, and of the racial and class struggle of the time. Originally printed in Seattle in 1935, this hitherto unknown document, of which no other known copies exist, is presented here for the first time. It includes a foreword by Robin D.G. Kelley and an introduction by Andrew H. Lee. Mr. Lee discovered the book as part of a gift to the Tamiment Library by the family of Joe North, an important figure in the Communist Party-USA, and an editor at the seminal left-wing journal, the New Masses. A true historical find and an excellent tool for teaching the case itself and the period which it so indelibly marked, this book allows us to see the Scottsboro case through a unique and highly provocative lens.