Inka Bodies and the Body of Christ: Corpus Christi in Colonial Cuzco, Peru 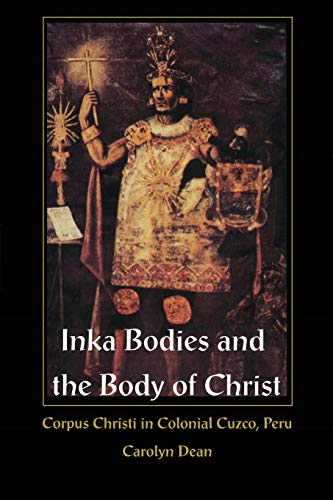 "In Inka Bodies and the Body of Christ, Dean displays superior knowledge of Cuzco society in the seventeenth century: its religious institutions, belief systems, painters, and relations between colonizers and colonized. This long-awaited book will be welcomed by specialists in the field."-R. T. Zuidema, University of Illinois "A provocative and nuanced interdisciplinary study. Dean effectively moves beyond mere historical reconstruction to explore the religious festival of Corpus Christi as an aesthetic, expressive, and sociopolitical event not only within colonial Cuzco life but within the broader context of the colonial enterprise in the Americas."-Jeanette Favrot Peterson, University of California, Santa Barbara

In Inka Bodies and the Body of Christ Carolyn Dean investigates the multiple meanings of the Roman Catholic feast of Corpus Christi as it was performed in the Andean city of Cuzco after the Spanish conquest. By concentrating on the era's paintings and its historical archives, Dean explores how the festival celebrated the victory of the Christian God over sin and death, the triumph of Christian orthodoxy over the imperial Inka patron (the Sun), and Spain's conquest of Peruvian society. As Dean clearly illustrates, the central rite of the festival-the taking of the Eucharist-symbolized both the acceptance of Christ and the power of the colonizers over the colonized. The most remarkable of Andean celebrants were those who appeared costumed as the vanquished Inka kings of Peru's pagan past. Despite the subjugation of the indigenous population, Dean shows how these and other Andean nobles used the occasion of Corpus Christi as an opportunity to construct new identities through tinkuy, a native term used to describe the conjoining of opposites. By mediating the chasms between the Andean region and Europe, pagans and Christians, and the past and the present, these Andean elites negotiated a new sense of themselves. Dean moves beyond the colonial period to examine how these hybrid forms of Inka identity are still evident in the festive life of modern Cuzco. Inka Bodies and the Body of Christ offers the first in-depth analysis of the culture and paintings of colonial Cuzco. This volume will be welcomed by historians of Peruvian culture, art, and politics. It will also interest those engaged in performance studies, religion, and postcolonial and Latin American studies.

1. Inka Bodies and the Body of Christ: Corpus Christi in Colonial Cuzco, Peru

2. Inka Bodies and the Body of Christ: Corpus Christi in Colonial Cuzco, Peru