Verwandte Artikel zu Learning to Live Out Loud: A Memoir

Laurie, Piper Learning to Live Out Loud: A Memoir

Learning to Live Out Loud: A Memoir 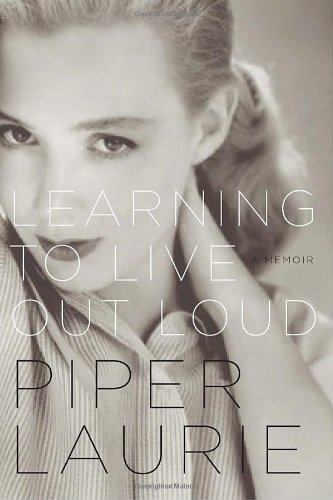 An intimate memoir by three-time Oscar nominee Piper Laurie, one of Hollywood's most gifted and respected actresses

At the age of seventeen, in the glory days of movie-making, Piper Laurie was living every little girl’s dream. Having been selected by Universal Studios to be a contract star, Piper was removed from her acting class and provided with stylists, chaperones, leading roles, and handsome dates, and elevated to the heights of Hollywood. Her beauty was admired by the likes of Ronald Reagan, Howard Hughes, Paul Newman, Tony Curtis, as well as dozens of directors and legions of fans. Her name was emblazoned on marquees across America for hit movies of the fifties such as the The Prince Who Was a Thief, The Mississippi Gambler, and Ain’t Misbehavin’.

But Piper discovered early on that the little girl’s dream was not her own. Mortified by the shallowness of the roles and movies she was given, she longed for the freedom and fulfillment of her own artistic vision. After years in the studio system, shy Piper Laurie found her voice and the courage to burn her contract. It was only after she left the oppressive studio culture that she began to star in the TV shows, plays, and films that truly became the hallmarks of her career: The Glass Menagerie on Broadway, the original Days of Wine and Roses, The Hustler, the iconic Carrie, and Twin Peaks. She grew into a three-time Oscar-nominated actress, an accomplished sculptor, and a director.

This memoir is the inspiring tale of Piper’s perseverance to break from tradition and to practice her craft at the highest level. She started life as a withdrawn, mute child who couldn’t find her voice and was transformed into a woman who learned to live out loud by her own rules.

PIPER LAURIE (born Rosetta Jacobs) has performed in a hundred films and dozens of plays. She has been nominated three times for an Oscar and received an Emmy and a Golden Globe Award. She was honored as Harvard’s Woman of the Year and with the Spirit of Hope Award for her many trips to entertain the troops in Korea. Her film credits include The Hustler, Carrie, The Grass Harp, Tim, and Children of a Lesser God. She is also well remembered for her dual roles as Catherine Martell and the Japanese businessman in David Lynch’s Twin Peaks. She lives in Los Angeles.

1. Learning to Live Out Loud: A Memoir

2. Learning to Live out Loud, A Memoir

Buchbeschreibung Crown Archetype, 2011. Hardcover, with photos. Zustand: New. Zustand des Schutzumschlags: New. First Edition; First Printing. Book and DJ New. NO other names or ANY markings. New DJ not price clipped ($24.99) ; Flat signed by Piper Laurie at the title page. NOT inscribed to anyone ("my thanks" and signed). Book ships in a box, USA. ; 357 pages; Signed by Author. Bestandsnummer des Verkäufers 52247

3. Learning to Live Out Loud: A Memoir

4. Learning to Live Out Loud: A Memoir [Hardcover] Laurie, Piper