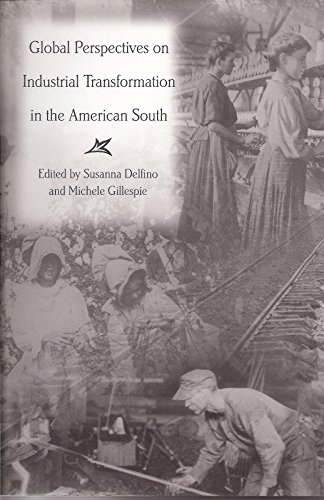 Covering a period from the late colonial age to World War I and beyond, this collection of essays places the economic history of the American South in an international light by establishing useful comparisons with the larger Atlantic and world economy. In an attempt to dispel long-lasting myths about the South, the essays analyze the economic evolution of the South from the slave era. The once-common conception of a backward, wholly agricultural antebellum South occupied only by wealthy planters, poor whites, and contented slaves has finally given way to one of economic and social dynamism as well as regional prosperity. In a coherent and cohesive progression of subjects, these essays show that the South was deeply enmeshed in the Atlantic economy since the colonial age and, after the Civil War, retained distinctive needs that caused increasing departure from the course northerners were taking on matters of political economy. This approach also helps explain the motivations behind the political choices made by the South as an eminently export-oriented region. This book shows that the South was not industrially slower to develop than either the majority of the northern states, especially in the West, or the countries of Western Europe. In fact, the apparently disappointing performance of the New South's economy appears to be the result of more pervasive and largely uncontrollable trends that affected the national as well as the international economy. Global Perspectives on Industrial Transformation in the American South makes an important contribution to the economic history of the South and to recent efforts to place American history in a more international context.

Susanna Delfino is Senior Researcher and Professor of American History at the University of Genoa in Italy. She is the author or editor of several books, including, along with Michele Gillespie, Neither Lady nor Slave: Working Women of the Old South. Michele Gillespie is Professor of History at Wake Forest University in Winston-Salem, North Carolina. She is the author of Free Labor in an Unfree World: White Artisans in Slaveholding Georgia, 1789-1860 and coeditor of Taking Off the White Gloves: Southern Women and Women Historians (University of Missouri Press).

3. Global Perspectives on Industrial Transformation in the American South (New Currents in the History of Southern Economy and Society)

4. Global Perspectives on Industrial Transformation in the American South

5. Global Perspectives on Industrial Transformation in the American South (New Currents in the History of Southern Economy and Society) [Paperback] Delfino, Susanna and Gillespie, Michele