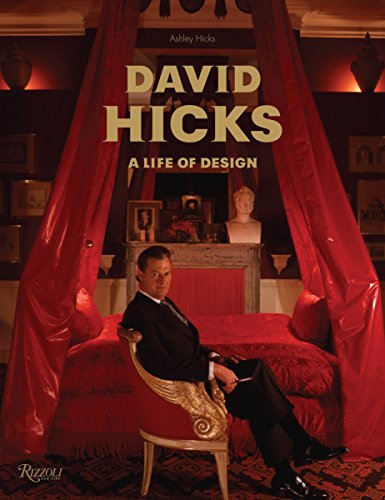 "The Hicks book is THE book of the season." --Stephen Drucker, Editor in Chief, House Beautiful "[A] lavish illustrated survey of the renowned British decorator's work by his son...plenty of dish on Hicks's glamorous life and times..." --The New York Times Magazine "[A]n elegant volume that showcases Hicks' power to conjure up an entirely new atmosphere and transform a space into an enchanting oasis. With 700 breath taking illustration this gorgeous book will be an instant classic...!" --Le Petit Blog "If you are a Hicks fan, or if you collect monographs of great designers, I think this book will be a worthy addition to your collection." --Peak of Chic "If you can't get to Paris to experience David Hicks designs in person then I recommend the new book, David Hicks: A Life of Design by his son Ashley Hicks." --Habitually Chic "[A]n intimate portrait of the ultimate designer...a technicolor biography..." --Design New England

David Hicks is acknowledged as one of the most important interior designers of the late twentieth century, in the company of Albert Hadley and Billy Baldwin. Known for his bold use of color, eclecticism, and geometric designs in carpets and textiles, Hicks turned English decorating on its head in the '50s and '60s. His trademark use of electrifying color combinations, and mixing antiques, modern furniture, and abstract paintings became the "in style" for the chic of the day, including Vidal Sassoon and Helena Rubinstein. By the '70s, David Hicks was a brand; his company was making wallpaper, fabrics, and linens and had outposts in eight countries, including the U.S. where he worked with the young Mark Hampton, and where his wallpaper was used in the White House. "My greatest contribution as an interior designer has been to show people how to use bold color mixtures, how to use patterned carpets, how to light rooms, and how to mix old with new, '' he stated in his 1968 work, David Hicks on Living--with Taste, the last authoritative book on his work. Written by his son Ashley Hicks, who has unprecedented access to Hicks's archives, personal photos, journals, and scrapbooks, this is a vibrantly illustrated celebration of a half century of stunning interiors.

1. David Hicks: A Life of Design

2. David Hicks: A Life of Design