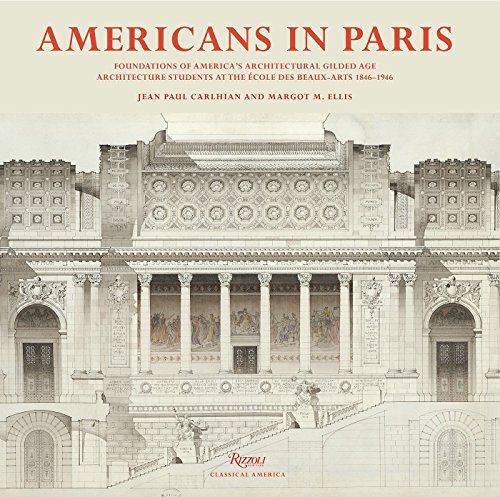 "Many notable Stateside Beaux Arts buildings, while uniquely American, owe their design in large part to a fabled Paris educational institution where architects received rigorous formal training. Americans in Paris is a captivating volume that offers a look at the curriculum that laid the foundation for some of this country's most revered architects. Authors Jean Paul Carlhian and Margot M. Ellis offer insight into a movement that effectively secured an architectural identity for a relatively young America. The journeys of the French-trained American architects, and their common decision to return home to work would leave an indelible mark on America's streetscapes." -Architectural Digest "The journey for these students to Paris was a long one, but this volume illustrates the immense payoff that the cole had on many of their careers. It would make a tremendous addition to any art, architecture, or architectural history collection." -ART LIBRARIES SOCIETY OF NORTH AMERICA

A lavishly produced volume documenting the work and history of American architecture students at the influential Ecole des Beaux-Arts, Paris. The Ecole des Beaux-Arts in Paris, renowned as one of the great art and architecture schools, is the namesake and founding location of the Beaux-Arts architectural movement. Known for demanding classwork and setting the highest standards, the Ecole attracted students from around the world, including the United States, where students returned to design buildings that would influence the history of architecture in America, including the Boston Public Library of 1888-95 (Charles McKim of McKim, Mead and White) and the New York Public Library of 1897-1911 (John Carrere of Carrere and Hastings). This book presents a comprehensive overview of the seminal early work of a century of American architects who studied at the famous school before going on to design and build many of the nation's most important buildings and monuments.. NOTA: El libro no está en espańol, sino en inglés.

Buchbeschreibung Rizzoli, 2014. Zustand: Good. A+ Customer service! Satisfaction Guaranteed! Book is in Used-Good condition. Pages and cover are clean and intact. Used items may not include supplementary materials such as CDs or access codes. May show signs of minor shelf wear and contain limited notes and highlighting. Bestandsnummer des Verkäufers 0847843408-2-4

Buchbeschreibung Rizzoli, 2014. Hardcover. Zustand: GOOD. Has little wear to the cover and pages. Contains some markings such as highlighting and writing. Bestandsnummer des Verkäufers 0847843408_abe_gd