The Editors Of Southern Living 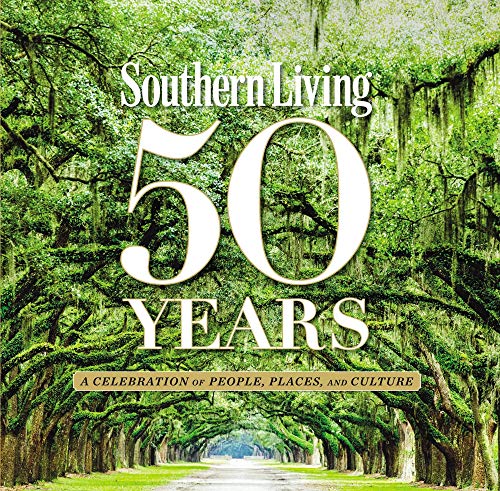 For the last 50 years, Southern Living magazine has reported on and photographed what makes the South so very unique and how it has evolved; it's distinct regions, its music, its homes, its gardens, its food, and most importantly, its people. Now, to mark its Golden Anniversary, Southern Living presents a gorgeous gift book that tells the true story of the South as only Southerners and Southern Living can tell it.

Filled with evocative images, fascinating stories, revealing explorations, and time-honored recipes, Southern Living 50 Years is about how Southerners live, what they value, how they cook, how they welcome people into their homes. The book is divided into three sections:

Journey South: A visual road trip through the South accompanied by thoughtful essays

Welcome Home: A celebration of the Southern home including gardens, architecture, design, and indoor and outdoor living.

The Southern Table: The South is famous for nothing if not its food. The book includes an exploration of the evolution of regional cuisine and includes 40 favorite recipes from Southern Living magazine with many additional recipes from renowned Southern chefs.
Southern Living 50 Years reminds Southerners what makes their region and their lifestyle so special. And for non-Southerners, it serves as a fascinating guidebook and provides an authentic view of the distinctive culture of the South.

Valerie Fraser Luesse is an award-winning magazine writer, best known for her feature stories and essays in Southern Living. A former senior writer for the magazine, Luesse contributed more than 30 essays to its Southern Journal column. Her work has been anthologized in the audio collection Southern Voices and in the essay collection A Glimpse of Heaven, featuring works by C.S. Lewis, Randy Alcorn, John Wesley, and others. Specializing in stories about unique pockets of Southern culture, Luesse has published major pieces on the Mississippi Delta, Louisiana's Acadian Prairie, and the Outer Banks of North Carolina. Her editorial section on the recovering Gulf Coast after Hurricane Katrina won the 2009 Travel Writer of the Year award from the Southeast Tourism Society. During her 22-year career with Southern Progress Corp., Luesse contributed to the Travel, Gardens, and Foods sections of flagship Southern Living, as well as to Cooking Light, Weight Watchers, and Goodness magazines. She also served on the planning committee for Writing Today, an annual writer's conference whose Grand Masters included such luminaries as Eudora Welty, Horton Foote, Rita Dove, Gay Talese, and Pat Conroy. She has completed her first novel, Glory, Alabama, and is working on a sequel, Coming Up a Cloud. A rural Alabama native, Luesse now makes her home in Birmingham, where she freelances and blogs at goindowntomamas.com.

1. Southern Living 50 Years: A Celebration of People, Places, and Culture

3. Southern Living 50 Years: A Celebration of People, Places, and Culture

4. Southern Living 50 Years: A Celebration of People, Places, and Culture