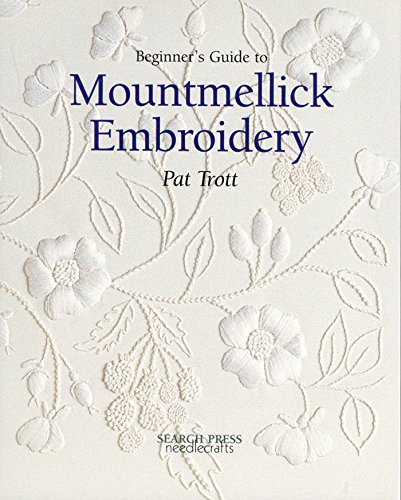 The embroidery is traditionally worked on close-woven cotton with cotton thread and it has a great elegance. Flowing floral patterns intertwine with stems and leaves, the smooth satin stitches contrasting wonderfully with the padded, knotted stitchery and untextured background. These natural designs are often fairly large and the sculptured patterns have an appealing bold quality, which is enhanced by the absence of colour and the addition of knitted fringed fringes., Pat Trott explains all the techniques with clear step-by-step photography and inspiring easy-to-follow projects. This book will be welcomed by beginners and also embroiderers of all skill levels.

Do you ever cringe at the thought of giving your hand-embroidered masterpeices a good washing - in fact, washing them over and over and over gain? Way over in Ireland, there's a place called Mountmellick, where, in the early 1800's, a school was established to teach an affordable embroidery technique to women and girls. What is it that makes Mountmellick embroidery different from other types of whitework? There are actually several aspects of Mountmellick embroidery that differentiate this technique from other forms of whitework. First of all, Mountmellick is not done on linen. Rather, authentic Mountmellic fabric is a heavy cotton jean fabric (not denim, really) - with a nice sheen on the back of it, the side on which the embroidery is done. It's a durable fabric, and it stands up to laundering. The more it's washed, the shinier it seems to become. While the material has a nice sheen, the thread is actually matte. This nice contrast is a trademark of real Mountmellick work. In fact, in the era of mercerized cotton (which has a chemically-induced shine), it can be hard to find the proper threads for real Mountmellick work. Good thing there's Lacis, which does have the matte thread. (Look under embroidery cotton). In many forms of whitework, the designs are somewhat delicate, and cutwork or openwork is often involved. In Mountmellick Embroidery, the designs are definitely bold, and cutwork and openwork are never involved - it's all straight surface embroidery. The common motifs in Mountmellick Embroidery are taken from nature - flowers, berries, brambles, leaves, stems, etc. The typical stitches are satin stitch (padded), stem or outline, Mountmellick stitch, knots, feather stitch, and buttonhole, and variations on all of these. The edges in Mountmellic embroidery are generally finished with buttonhole stitch or with fringe, depending on how the stuff is to be used. The type of embroidery that flourished in Mountmellick was originally intended to help poor Irish women and girls survive the austere living of the Industrial Age in Ireland. The supplies were inexpensive (not so today - if you want the "real stuff" when it comes to Mountmellick fabric, you'll pay anywhere from $30 - $50 / yard for it), and the goods were sold, often to visiting Americans, from whence the technique spread in popularity. It's still a popular technique, and in the embroidery world, it's enjoying a renewed interest. If you'd like to give Mountmellick embroidery a try, I suggest starting with Pat Trott's "Beginner's Guide to Mountmellick Embroidery." It's very practical and down-to-earth. She's got great suggestions for framing up your work for stitching, and a nice selection of authentic patterns and stitches. The instructions in the book are very easy to follow, and you'll master the basics of Mountmellick whitework in no time with Pat's clear instructions and beautiful designs http://www.needlenthread.com/2006/08/mountmellick-embroidery.html Featured in The Needlework Books that Keep on Giving October 2016 http://www.needlenthread.com/2016/10/beginners-guides-the-needlework-books-that-keep-on-giving.html * Mary Corbet's Needle 'n Thread *

Pat Trott was introduced to Armenian needlelace by her mother at a very early age, and this led to her passion for embroidery and stitchery of all kinds. Later, as a skilled embroiderer, she was attracted to Mountmellick because of the numerous different stitches involved, and she went on to become an expert in this unique craft. Pat is a life member of the Embroiderers' Guild and holds regular workshops for many Guild branches, colleges and schools. Pat has had her work featured in Needlework Magazine and New Stitches Magazine.