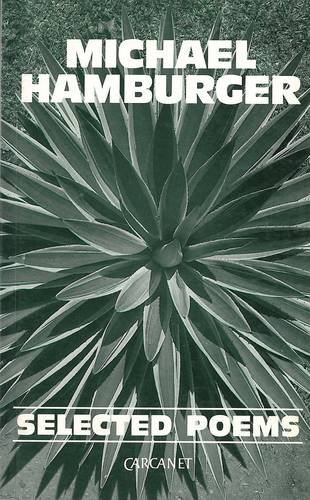 Buchbeschreibung Carcanet, Great Britain, 1988. Soft Cover. Zustand: Very Good. 1st Paperback Edition. Paperback. Selected Poems. For his Selected Poems Michael Hamburger had drawn from four decades' work, and has added a group of new poems. The book reveals the broad range of his writing: sharp-edged lyrics, satires and political poems, poems about place, poems out of dreams, images of exile. The poet who travelled far and travelled light finally puts down roots in a place and soil he has come to love, despite its hardships. His own poetry has sometimes been overshadowed by his work as a translator, but in recent years his central achievement has begun to be properly recognised. 160 pp. (We carry a wide selection of titles in The Arts, Theology, History, Politics, Social and Physical Sciences. academic and scholarly books and Modern First Editions ,and all types of Academic Literature.) Size: 8vo - over 7Š" - 9Š" tall. Paperback. Bestandsnummer des Verkõufers 090716

Buchbeschreibung Carcanet Press, Limited, 1701. Zustand: Good. Shows some signs of wear, and may have some markings on the inside. Bestandsnummer des Verkõufers 17284812-6

Buchbeschreibung Carcanet Press, Limited, 1701. Zustand: Good. Former Library book. Shows some signs of wear, and may have some markings on the inside. Bestandsnummer des Verkõufers GRP96922412