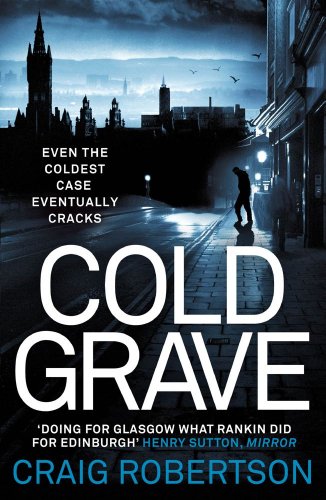 'The delight about Robertson is the way he slots in so neatly between the more visceral and blackly funny Stuart MacBride and the generally safer confines of Rankin's Rebus, so what you get is a good solid police procedural underpinned by an adept feeling for the realm of human relationships and the darker recesses of the human psyche.' Eurocrime
'Hot on the blood-soaked heels of Robertson s previous hits, Random and Snapshot, Cold Grave takes a spine-tingling setting and an original storyline and adds something more. In Scottish crime fiction, we have an abundance of maverick sleuths and jaded old hands, but there s a gap in the market for a hot new crime-fighting couple. Narey and Winter have just claimed it.'
'The cold climate of Scandinavian crime fiction is invoked by the publishers of Craig Robertson's highly persuasive novel, and not without justice. It is November 1993, and Scotland is suffering under an ice-cold winter, with the Lake of Menteith froze over. A young man and woman are able to walk to the historic island of Inchmahome located in the middle of the lake. But only the man returns. Spring arrives, and as the Abbey prepares for summer visitors, the body of a girl is discovered with her skull crushed. In the present day, retired detective Alan Narey finds he cannot forget the unsolved crime...'Barry Forshaw, Good Book Crime Guide --Daily Record

Even the coldest case will eventually crack. November 1993. Scotland is in the grip of the coldest winter in living memory and the Lake of Menteith is frozen over. A young man and woman walk across the ice to the historic island of Inchmahome which lies in the middle of the lake. Only the man comes back. In the spring, as staff prepare the abbey ruins for summer visitors, they discover the unidentifiable remains of the body of a girl, her skull violently crushed. Twenty years later, present day. Retired detective Alan Narey is still haunted by the unsolved crime. Desperate to relieve her father's conscience DS Rachel Narey returns to the Lake of Menteith and unofficially reopens the cold case. With the help of police photographer Tony Winter, Rachel discovers that the one man her father had always suspected was the killer has recently died. Risking her job and reputation, Narey prepares a dangerous gambit to uncover the killer's identity - little knowing who that truly is. Despite the freezing temperatures the ice cold case begins to thaw, and with it a tide of secrets long frozen in time are suddenly and shockingly unleashed.

Buchbeschreibung Paperback. Zustand: Good. Connecting readers with great books since 1972. Used books may not include companion materials, some shelf wear, may contain highlighting/notes, may not include cdrom or access codes. Customer service is our top priority!. Bestandsnummer des Verkäufers S_300504242

Buchbeschreibung Paperback. Zustand: Very Good. The book has been read, but is in excellent condition. Pages are intact and not marred by notes or highlighting. The spine remains undamaged. Bestandsnummer des Verkäufers GOR003959691

Buchbeschreibung Paperback. Zustand: Good. The book has been read but remains in clean condition. All pages are intact and the cover is intact. Some minor wear to the spine. Bestandsnummer des Verkäufers GOR004257333

Buchbeschreibung Zustand: Good. Ships from the UK. Former library book; may include library markings. Used book that is in clean, average condition without any missing pages. Bestandsnummer des Verkäufers GRP69860289

Buchbeschreibung Paperback. Zustand: Good. All orders are dispatched the following working day from our UK warehouse. Established in 2004, we have over 500,000 books in stock. No quibble refund if not completely satisfied. Bestandsnummer des Verkäufers mon0005623923

Buchbeschreibung Paperback. Zustand: Very Good. Shipped within 24 hours from our UK warehouse. Clean, undamaged book with no damage to pages and minimal wear to the cover. Spine still tight, in very good condition. Remember if you are not happy, you are covered by our 100% money back guarantee. Bestandsnummer des Verkäufers 6545-9780857204165

Buchbeschreibung Paperback. Zustand: Very Good. Cold Grave This book is in very good condition and will be shipped within 24 hours of ordering. The cover may have some limited signs of wear but the pages are clean, intact and the spine remains undamaged. This book has clearly been well maintained and looked after thus far. Money back guarantee if you are not satisfied. See all our books here, order more than 1 book and get discounted shipping. Bestandsnummer des Verkäufers 7719-9780857204165