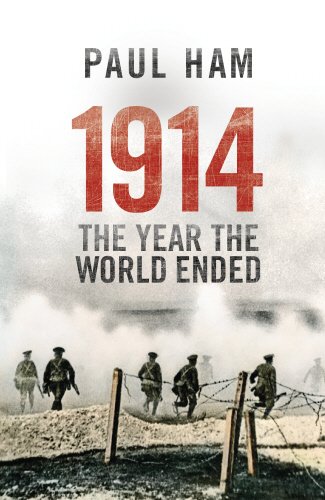 In August 1914, the European powers plunged the world into a war that would kill or wound 37 million people, tear down the fabric of society, uproot ancient political systems and set the world on course for the bloodiest century in human history.

On the eve of the 100th anniversary of that terrible year, Ham takes the reader on a journey into the labyrinth, to reveal the complexity, the layered motives, the flawed and disturbed minds that drove the world to war. What emerges is a clear sense of what happened and why. 'To understand the past,' Ham concludes, 'and share that understanding, is the chief role of the historian. To understand the past is to liberate ourselves from its awful shadow and steel ourselves against it happening again.'

Paul Ham is the author of the critically acclaimed Sandakan, Hiroshima Nagasaki, Vietnam: The Australian War, Kokoda and 1914: The Year the World Ended.

A former correspondent for the Sunday Times (between 1998-2012), Paul was born in Sydney and educated in Australia and Britain, where he completed a Masters degree in Economic History at the London School of Economics and Political Science.

He now writes history full-time, and lives in Sydney and Paris.

Buchbeschreibung Doubleday, 2015. Hardcover. Zustand: Very Good. Very Good: a copy that has been read, but is in excellent condition. Pages are intact and not marred by notes or highlighting. The spine remains undamaged. Most items will be dispatched the same or the next working day. Bestandsnummer des Verkäufers wbb0012386824

Buchbeschreibung Doubleday UK, 2015. Zustand: Good. A+ Customer service! Satisfaction Guaranteed! Book is in Used-Good condition. Pages and cover are clean and intact. Used items may not include supplementary materials such as CDs or access codes. May show signs of minor shelf wear and contain limited notes and highlighting. Bestandsnummer des Verkäufers 0857523465-2-4

Buchbeschreibung Doubleday, 2015. Hardcover. Zustand: Very Good. WE ARE PROCESSING ORDERS AS NORMAL DURING THIS VIRUS EPIDEMIC, ALL ITEMS ARE SENT BY ROYAL MAIL. DISPATCHED FROM THE UK WITHIN 24 HOURS ( BOOKS ORDERED OVER THE WEEKEND DISPATCHED ON MONDAY) BY ROYAL MAIL. ALL OVERSEAS ORDERS SENT BY AIR MAIL. WE ALSO ACCEPT PAYMENT IN US DOLLARS OR EURO BY BANK TRANSFER. Bestandsnummer des Verkäufers mon0000649785

Buchbeschreibung Paperback. Zustand: Very Good. The book has been read, but is in excellent condition. Pages are intact and not marred by notes or highlighting. The spine remains undamaged. Bestandsnummer des Verkäufers GOR009723547