Verwandte Artikel zu The Pedant In The Kitchen

Barnes, Julian The Pedant In The Kitchen

The Pedant In The Kitchen 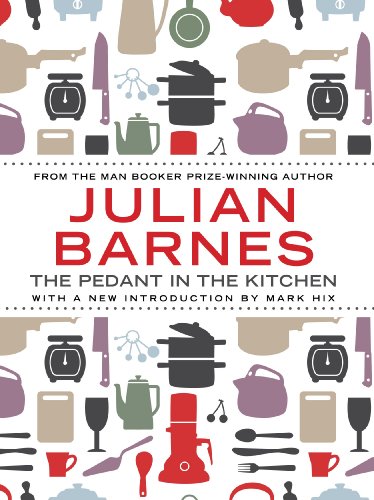 Julian Barnes's musings on cookery form the perfect bite-size anthology for literary/foodie folk... with an introduction from The Independent's Mark Hix, The Pedant in the Kitchen is as crisp and tart (yes, yes, puns intended) a piece of writing about food as one will find anywhere... it makes for compelling reading... Did I mention that it's funny? Barnes hams up his own cack-handedness in the kitchen delightfully... a sequel would be most delicious. -- Lisa Markwell * Independent on Sunday * a brilliant and self-mocking modern classic * Daily Mail *

The Pedant's ambition is simple. He wants to cook tasty, nutritious food; he wants not to poison his friends; and he wants to expand, slowly and with pleasure, his culinary repertoire. A stern critic of himself and others, he knows he is never going to invent his own recipes (although he might, in a burst of enthusiasm, increase the quantity of a favourite ingredient). Rather, he is a recipe-bound follower of the instructions of others. It is in his interrogations of these recipes, and of those who create them, that the Pedant's true pedantry emerges. How big, exactly, is a 'lump'? Is a 'slug' larger than a 'gout'? When does a 'drizzle' become a downpour? And what is the difference between slicing and chopping?This book is a witty and practical account of Julian Barnes' search for gastronomic precision. It is a quest that leaves him seduced by Jane Grigson, infuriated by Nigel Slater, and reassured by Mrs Beeton's Victorian virtues. The Pedant in the Kitchen is perfect comfort for anyone who has ever been defeated by a cookbook and is something that none of Julian Barnes' legion of admirers will want to miss.

1. The Pedant In The Kitchen

2. The Pedant In The Kitchen