Verwandte Artikel zu What the Eye Hears: A History of Tap Dancing

Seibert, Brian What the Eye Hears: A History of Tap Dancing

What the Eye Hears: A History of Tap Dancing 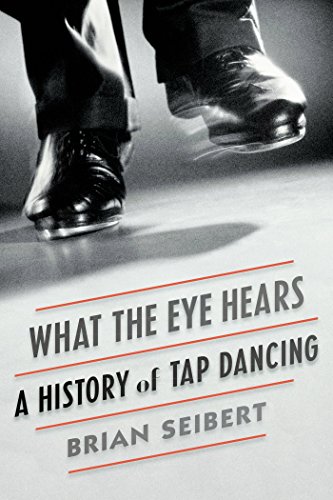 "His big, smart, wonderfully anecdoctal and definitive history of tap dance...offers passion about its subject, deft evocations of dance action and a narrative mischief suited to tap's trickster mentality. . . Mr. Seibert's way of explaining tap constitutes nothing less than a social history of our country's deepest folk and pop roots. . . He rolls out a cast of thousands. . . and he layers their stories--black dancers on white on black--so deftly that a reader turning the pages gets a visceral sense of the art's constant overlap. . . Decorating each phase of this tap epic are terrific moments in which the art's rhythmical virtuosity seems to pass into Mr. Seibert's own prose. . . Nothing in this rich volume goes awry." --Elizabeth Kendall, The New York Times

"There have been some valuable works [about tap dancing] but never a volume that did the real heavy lifting: critical, analytical, historical, comprehensive. . . That book has now been published. . . [Seibert] himself is an artist -- he writes beautiful prose and is a crackerjack storyteller. . . It's hard to know which of Seibert's dance portraits to highlight because there are so many wonderful ones." --Joan Acocella, The New Yorker

"Brian Seibert's authoritative What the Eye Hears illuminates those beginnings [of tap dance] -- along with what happened afterward -- as well as anyone ever will. His research is as thorough about the 1820s as about last week. Seibert . . . has smoked out every clip, sat through every silly old movie, read everything and sorted it all out for the rest of us . . . [he] does a sterling job of telling the story of where tap has been, and why it matters." --John McWhorter, New York Times Book Review

"Seibert cares, first and foremost, about the dance as dance. He's done a marvelous job tracking that dance, too, digging deep into primary sources to help you see, and hear, dozens of tappers from the nineteenth century to the present . . . Seibert generously invites both the famous and nearly forgotten into his pages, making a case for why each of them matters as an artist. . . This is masterful storytelling." --Megan Pugh, The New Republic

"A comprehensive and engaging study and celebration of this lively art. . .What the Eye Hears is much more than a roll-call of tap stars. Mr. Seibert also stages a challenge-dance with the big themes entwined in tap's history. . . His critical footwork dazzles." --Tom Nolan, The Wall Street Journal

"Seibert, a dance critic for the New York Times, documents every stage and hoofer with passion, intelligence, and detail." --Christine Smallwood, Harper's Magazine

"Mr. Seibert's writing is so engaging, transporting the reader back in time. . . You would need a heart of stone for his enthusiasms not to rub off of you." --The Economist

"Oh, but this book is fun. Brian Seibert's meticulously researched, breezily written history of tap dance, "What the Eye Hears," shuffles and slides and Shim Shams across the page irresistibly; when you close its pages, you still hear tapping feet." --Moira Macdonald, Seattle Times

"A glorious account of one of the most popular forms of dance . . . Anyone interested in dance, popular culture, and African American history will enjoy this comprehensive work." --Carolyn Mulac, Booklist

"An intelligent, thoughtful assessment worth dipping into by anyone interested in American culture." --Kirkus Reviews

"Tap is America's great contribution to dance, and Brian Seibert's book gives us--at last!--a full-scale (and lively) history of its roots, its development, and its glorious achievements. An essential book!" --Robert Gottlieb, dance critic for The New York Observer and editor of Reading Dance

"Brian Seibert's What the Eye Hears not only tells you all you wanted to know about tap dancing; it tells you what you never realized you needed to know. Drawing on his massive research, Seibert follows the art through its roots, its vaudeville heyday, its forays onto Broadway and into Hollywood, its decline, its renaissance, and its dissemination beyond American shores. And he recounts all this in an easygoing style, providing vibrant descriptions of the dancing itself and illuminating commentary by those masters who could make a floor sing." --Deborah Jowitt, author of Jerome Robbins: His Life, His Theater, His Dance and Time and the Dancing Image

"In the best possible sense, Seibert is in love with his subject. He almost can't get enough of it, digging deeply into the lore as well as the history of tap's emergence as an original American art form. His observations are entertaining and at times--since minorities have been preponderant from the start--profoundly moving. When it comes to the greats--Astaire, Bojangles, Savion--Seibert's detailed descriptive insights seem to take us truly inside their artistry." --Nancy Reynolds, Director of Research, The George Balanchine Foundation

Finalist for the National Book Critics Circle Award in Nonfiction

Magisterial, revelatory, and-most suitably-entertaining, What the Eye Hears offers an authoritative account of the great American art of tap dancing. Brian Seibert, a dance critic for The New York Times, begins by exploring tap's origins as a hybrid of the jig and clog dancing from the British Isles and dances brought from Africa by slaves. He tracks tap's transfer to the stage through blackface minstrelsy and charts its growth as a cousin to jazz in the vaudeville circuits and nightclubs of the early twentieth century. Seibert chronicles tap's spread to ubiquity on Broadway and in Hollywood, analyzes its decline after World War II, and celebrates its rediscovery and reinvention by new generations of American and international performers. In the process, we discover how the history of tap dancing is central to any meaningful account of American popular culture. This is a story with a huge cast of characters, from Master Juba (it was probably a performance of his in a Five Points cellar that Charles Dickens described in American Notes for General Circulation) through Bill Robinson and Shirley Temple, Fred Astaire and Ginger Rogers, and Gene Kelly and Paul Draper to Gregory Hines and Savion Glover. Seibert traces the stylistic development of tap through individual practitioners, vividly depicting dancers both well remembered and now obscure. And he illuminates the cultural exchange between blacks and whites over centuries, the interplay of imitation and theft, as well as the moving story of African-Americans in show business, wielding enormous influence as they grapple with the pain and pride of a complicated legacy. What the Eye Hears teaches us to see and hear the entire history of tap in its every step.

1. What the Eye Hears: A History of Tap Dancing

2. What the Eye Hears: A History of Tap Dancing

3. What the Eye Hears: A History of Tap Dancing

4. What the Eye Hears: A History of Tap Dancing

5. What the Eye Hears: A History of Tap Dancing

6. What the Eye Hears: A History of Tap Dancing