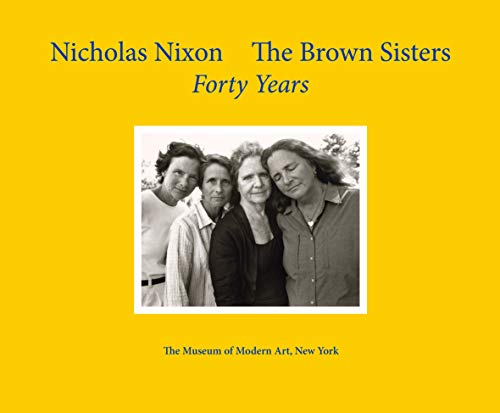 These subjects are not after attention, a rare quality in this age when everyoen is not only aphotographer but often his own favorite subject. In this, Nixon has pulle doff a paradox: The creation of photographs in which privacy is also the subject. The sisters' privacy has remained of utmost certain to the artist, and it shows in the work. Year after year, up to the last stunning shot with its triumphant shadowy mood, their faces and stances say, Yes, we will give you our image, but nothing else.--Susan Minot "The New York Times "

In August of 1974, the photographer Nicholas Nixon made a group portrait of his wife, Bebe, and her three sisters, Heather, Mimi and Laurie – the Brown sisters. He did not keep that image, but in 1975 he made another portrait of the four, who then ranged in age from 15 to 25. Working with an 8x10-inch view camera, whose large negatives capture a wealth of detail and a luscious continuity of tone, Nixon did the same in 1976, and this second successful photograph prompted him to suggest to the sisters that they assemble for a portrait every year. The women agreed, and have gathered for an annual portrait ever since. Nicholas Nixon: 40 Years of The Brown Sisters celebrates the fortiethanniversary of the series in 2014, featuring luminous tri-tone reproductions of all forty portraits, and a new afterword by curator Sarah Hermanson Meister, which examines the series’ public exhibitions, critical reception, and cult following. Like the previous editions of the series, published by The Museum of Modern Art in 1999 and 2008 for the twenty-fifth and thirtythird anniversaries of the series, and both out of print, Nicholas Nixon: 40 Years of The Brown Sisters is an important chapter in an ongoing project that we hope will continue for many years more.