Verwandte Artikel zu The Red and the White: A Family Saga of the American...

Graybill, Andrew R. The Red and the White: A Family Saga of the American West

The Red and the White: A Family Saga of the American West 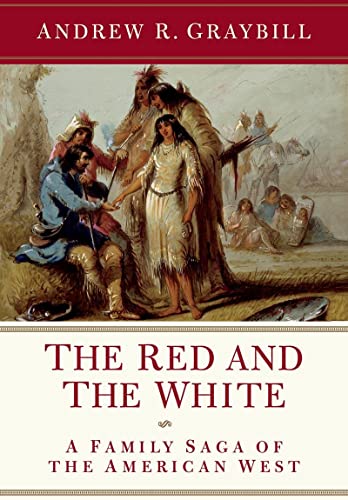 "As an account, Graybill's book could not be bettered... The Red and the White-complete with a Clarke family tree, maps, extensive notes, an up-to-date bibliography and a helpful index-constitutes an engrossing and important contribution to our understanding of the very mixed and complex past of the American West." -- Mick Gidley - Times Literary Supplement "Graybill...has written a gripping Western saga. But more, he has plumbed the depth of racial and generational conflict by means of previously unexamined archival material and interviews with descendants on both sides.... Western history buffs and general readers alike cannot fail to profit from a careful reading of its pages-dramatic, heartbreaking." -- The Wichita Eagle "The Red and the White...transforms a tragic, 19th-century story of heartbreak and revenge on the Rocky Mountain frontier, into a dynamic, multi-generational history that connects the American entrada into the Rockies with the Lewis and Clark expedition up to the white-Indian relations in present-day Montana. ...Graybill's saga is Shakespearean in its tragedy and Biblical in its parable of how the Indian tribes have endured a diaspora of such magnitude... [The] Clarke family chose a purposeful, meaningful life, offering up, for all of us, a shining example of the power and strength of the human spirit." -- Stuart Rosebrook - True West "[Graybill's] story of how one family walked "in two worlds-one red, the other white"-is, in the end, fascinating and often moving." -- Robert B. Mitchell - The Washington Post "[The Clarke family's] experiences provide fascinating insights into race relations on the evolving frontier.... Graybill's book is highly recommended for all readers interested in the 19-century West." -- Library Journal "A touching portrait of race relations on the frontier... Graybill uncovers a forgotten history culminating in the Marias Massacre, an epochal event for the Blackfeet but so obscure today that no marker commemorates its location. Evocative details and a close attention to the arc of its subjects' lives lend Graybill's narrative emotional heft... An entertaining and insightful exposition of an unjustly ignored facet of the American social fabric." -- Kirkus Reviews

National Book Award-winning histories such as The Hemingses of Monticello and Slaves in the Family have raised our awareness about America's intimately mixed black and white past. Award-winning western historian Andrew R. Graybill now sheds light on the overlooked interracial Native-white relationships critical in the development of the trans-Mississippi West in this multigenerational saga. Beginning in 1844 with the marriage of Montana fur trader Malcolm Clarke and his Piegan Blackfeet bride, Coth-co-co-na, Graybill traces the family from the mid-nineteenth century, when such mixed marriages proliferated, to the first half of the twentieth, when Clarke 's children and grandchildren often encountered virulent prejudice. At the center of Graybill's history is the virtually unexamined 1870 Marias Massacre, on a par with the more infamous slaughters at Sand Creek and Wounded Knee, an episode set in motion by the murder of Malcolm Clarke and in which Clarke 's two sons rode with the Second U.S. Cavalry to kill their own blood relatives.

1. The Red and the White: A Family Saga of the American West

2. The Red and the White: A Family Saga of the American West

3. The Red and the White: A Family Saga of the American West

Buchbeschreibung Liveright Publishing, 2013. Hardcover. Zustand: New. Zustand des Schutzumschlags: New. 1st Edition. THERE IS A BLACK "CLOSEOUT/REMAINDER" MARK ON THE TOP PAGE EDGES. At dawn on January 23, 1870, Major Eugene Baker deployed the four hundred men under his command in a skirmish line atop the bluffs overlooking the Big Bend in the Marias River, where below them lay a slumbering Piegan winter camp. Hardened by a four-day march through unbearably frigid weather, the Second U.S. Cavalry had come that day to avenge the murder of Malcolm Clarke, a former fur trader who had been struck down by his wife's cousin, a renegade Piegan warrior. Among the inflamed citizens who had joined the army campaign were Clarke's own two sons. In the ensuing carnage -- described by one of Baker's lieutenants as "the greatest slaughter of Indians ever made by U.S. troops" -- the Clarke siblings participated in the butchery of their own blood relatives. In this groundbreaking work of American history, Andrew R. Graybill places the Marias Massacre, as horrific as the more infamous slaughters at Sand Creek and Wounded Knee, within a larger three-generational family saga of the Clarke family itself. By turns gripping and heartbreaking, their unknown story illuminates the complex history of native-white intermarriage in the American Northwest, with particular attention to the mixed-blood children of such unions, "peoples-in-between," who struggled to negotiate the shifting grounds of race in nineteenth- and early twentieth-century America. Graybill sets his narrative against the backdrop of the booming American fur trade, which in 1844 brought together Malcolm Clarke -- an expelled West Point cadet -- and his teen-aged bride, Coth-co-co-na, a member of the most powerful Indian nation on the northwestern Plains. While historians of a previous generation might have ended their story with Clarke's grisly murder, Graybill uses previously unexamined archival material to trace the lives of two of his and Coth-co-co-na's children, Horace and Helen, and one of their grandsons, John, all of whom lived lives that were circumscribed by the binary racial calculus defining individuals as either Indian or white. THE RED AND THE WHITE offers us a searing portrait of native-white relationships, which date to the very beginnings of America, and whose offspring were contemptuously dismissed in their own time and often since as "half-breeds." Using a wealth of original documents, Graybill frames the Marias Massacre within a larger historical tableau, thus breaking new ground in our understanding of the racial complexities that helped shape America's fractious twentieth century. THERE IS A BLACK "CLOSEOUT/REMAINDER" MARK ON THE TOP PAGE EDGES. Bestandsnummer des Verkäufers 001100

4. The Red and the White: A Family Saga of the American West

5. The Red and the White: A Family Saga of the American West Graybill, Andrew R.