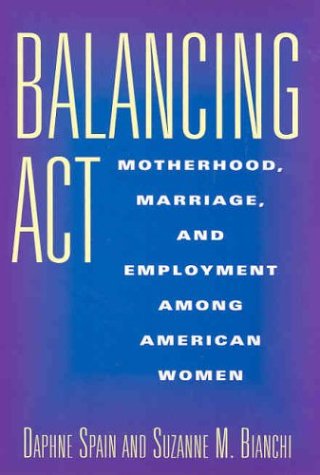 "A wonderful compendium of everything you always wanted to know about trends in women's roles—both in and out of the home. It is a balanced and data-rich assessment of how far women have come and how far they still have to go. "—Isabelle Sawhill, Urban Institute

"Based primarily on the 1990 population census, Balancing Act reports on the current situation of American women and temporal and cross-national comparisons. Meticulously and clearly presented, the information in this book highlights changing behaviors, such as the growing incidence of childbearing to older women, and unmarried women in general, and a higher ratio of women's earnings to men's. The authors' thoughtful analysis of these and other factors involved in women's fin de siècle 'balancing act' make this an indispensable reference book and valuable classroom resource." —Louise A. Tilly, Michael E. Gellert Professor of History and Sociology, The New School for Social Research

In Balancing Act, authors Daphne Spain and Suzanne Bianchi draw upon multiple census and survey sources to detail the shifting conditions under which women manage their roles as mothers, wives, and breadwinners. They chronicle the progress made in education—where female college enrollment now exceeds that of males—and the workforce, where women have entered a wider variety of occupations and are staying on the job longer, even after becoming wives and mothers. But despite progress, lower-paying service and clerical positions remain predominantly female, and although the salary gap between men and women has shrunk, women are still paid less. As women continue to establish a greater presence outside the home, many have delayed marriage and motherhood. Marked jumps in divorce and out-of-wedlock childbirth have given rise to significant numbers of female-headed households. Married women who work contribute more significantly than ever to the financial well-being of their families, yet evidence shows that they continue to perform most household chores.

Balancing Act focuses on how American women juggle the simultaneous demands of caregiving and wage earning, and compares their options to those of women in other countries. The United States is the only industrialized nation without policies to support working mothers and their families—most tellingly in the absence of subsidized childcare services. Many women are forced to work in less rewarding part-time or traditionally female jobs that allow easy exit and re-entry, and as a consequence poverty is the single greatest danger facing American women. As the authors show, the risk of poverty varies significantly by race and ethnicity, with African Americans—most of whose children live in mother-only families—the most adversely affected.

This volume contributes to the national dialogue about family policy, welfare reform, and responsibility for children by highlighting the pivotal roles women play at the intersection of family and work.

DAPHNE SPAIN is associate professor at the Department of Urban and Environmental Planning, University of Virginia.

SUZANNE M. BIANCHI is professor of sociology and faculty associate at the Center on Population, Gender, and Social Inequality, University of Maryland.

Buchbeschreibung Zustand: Good. Ships from the UK. Former library book; may include library markings. Used book that is in clean, average condition without any missing pages. Bestandsnummer des Verkäufers 1094414-6

Buchbeschreibung Zustand: Good. Your purchase helps support Sri Lankan Children's Charity 'The Rainbow Centre'. Ex-library, so some stamps and wear, but in good overall condition. May contain underlining and/or highlighting. Our donations to The Rainbow Centre have helped provide an education and a safe haven to hundreds of children who live in appalling conditions. Bestandsnummer des Verkäufers Z1-C-088-05201