Verwandte Artikel zu Firefight: Inside the Battle to Save the Pentagon on...

Creed, Patrick; Newman, Rick Firefight: Inside the Battle to Save the Pentagon on 9/11

Firefight: Inside the Battle to Save the Pentagon on 9/11 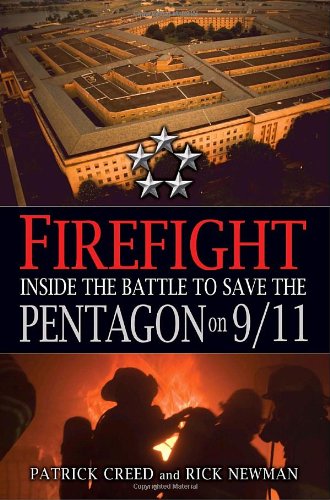 Advance praise for Firefight "Firefight is a gripping human drama and a powerful story-not to mention a significant addition to the annals of American history."-David Morrell, author of First Blood" ""Overshadowed by the calamity in New York, the attack on the Pentagon on September 11, 2001, was nonetheless a day of extraordinary drama, heroism, and tragedy. With riveting detail and a compelling narrative, Patrick Creed and Rick Newman have done a superb job in""Firefight of capturing the courage, chaos, and sacrifice of that remarkable day."-Steve Vogel, author of The Pentagon: A History "A gripping inside look at the swift actions taken by a small group of firefighters who saved the Pentagon from destruction."-Bing West, author of No True Glory: A Frontline Account of the Battle for Fallujah "Firefight presents a different view of September 11, getting into the actions and mindsets of both the firefighters and the military in Washington D.C. A powerful read."-Richard Picciotto, co-author of Last Man Down: A New York City Fire Chief and the Collapse of the World Trade Center "Firefight does an excellent job of showing the unique issues presented when the heart of America's military was attacked on September 11, 2001. As I read this book, I felt a brotherhood with the courageous professionals at the scene of the Pentagon and their need to ameliorate the suffering of others."-Lt. William Keegan, Jr., PAPD., author of Closure: The Untold Story of the Ground Zero Recovery Mission "This little-known but equally horrifying story of 9/11 will raise the hair on your neck and add to the historical outrage inspired by these senseless murders. The firefighters are seen in grit and in heroism as they fight their way through the Pentagon flames to contain the fires, triage the wounded, interrelate with the FBI, and search for the all-important black boxes. Read this book to remind yourself just how shocked you were t

Amid all the stories of tragedy and heroism on September 11, there is one tale that has yet to be told-the gripping account of ordinary men and women braving the inferno at the Pentagon to rescue friends and co-workers, save the nation's military headquarters, and defend their country. Pentagon firefighters Alan Wallace and Mark Skipper had just learned the shocking news that planes had struck the World Trade Center when they saw something equally inconceivable: a twin-engine jetliner flying straight at them. It was American Airlines Flight 77, rushing toward its target. In his Pentagon office, Army major David King was planning a precautionary evacuation when the room suddenly erupted in flames. Arlington firefighters Derek Spector, Brian Roache, and Ron Christman, among the first responders at the scene, were stunned by the sight that met them: a huge flaming hole gouged into the Pentagon's side, a lawn strewn with smoking debris, and thousands of people, some badly injured, stumbling away from what would become one of the most daunting fires in American history. For more than twenty-four hours, Arlington firefighters and other crews faced some of the most dangerous and unusual circumstances imaginable. The size and structure of the Pentagon itself presented unique challenges, compelling firefighters to devise ingenious tactics and make bold decisions-until they finally extinguished the fire that threatened to cripple America's military infrastructure just when it was needed most. Granted unprecedented access to the major players in the valiant response efforts, Patrick Creed and Rick Newman take us step-by-step through the harrowing minutes, hours, and days following the crash of American Airlines Flight 77 into the Pentagon's western facade. Providing fascinating personal stories of the firefighters and rescuers, a broader view of how the U.S. national security command structure was held intact, and a sixteen-page insert of dramatic photographs, Firefight is a unique testament to the fortitude and resilience of America.

1. Firefight: Inside the Battle to Save the Pentagon on 9/11

2. Firefight: Inside the Battle to Save the Pentagon on 9/11

3. Firefight: Inside the Battle to Save the Pentagon on 9/11

4. FIREFIGHT: INSIDE THE BATTLE TO